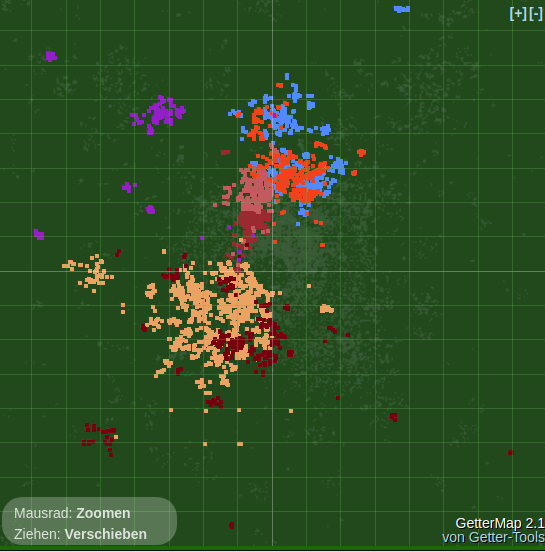 Germany is divided into 3 groups. They have given up on the possibility to cooperate.

NewOrder and SEK: 2 alliances 89 players. Friendly with SPQR and if to believe NB profile they will cooperate in Final. Domination in the SW.

Q, an alliance in NW with 15 players. Confed with Tuguinha.

Safiren: You have a WW too now?

Thomas: Yes. We have two and both were cleaned external. I did not check who got the points. Right now, we just took them for fun and we will see what will happen.

Last finals it was better than the year before where Russia was dominating the whole server and especially the building plan areas. Still, we saw a Dacia Meta with a lot of numbers winning easily in the end and some smaller groups like Russia, SPQR and PT+Prime behind. Dacia had the biggest defense and several good hammers for endgame. SPQR and Cerber/BAD had an intense war and both metas were too small to be a serious competitor for Dacia. I was surprised by the performance of Prime/PT.

For me, the server is too much dominated by the number of accounts and so the number of WW defense and hammers in the end. I got the feeling, that the big metas go into their sectors and try to solve the game by outnumber the other. I prefer a more aggressive playstyle during the whole server. I’m excited about the new mechanics in beta and how this could work on classic WW servers. Maybe we see more smaller metas in future and more war. It’s good, that TG is working for the next level of Travian.

Safiren: Last Final with several smaller metas was more fun.I’ve heard that you and SPQR will cooperate with NB in Final.

Thomas: I’ve heard this for qualifications aswell. It seems not to be the case 😉

Im not included in this kind of diplomacy stuff. I’m leading NewOrder together with a friend and we feel very good with SPQR and we trust them whatever will happen. In the end we want an intense gameplay. And as you know SPQR is an aggressive shortwar union.

Safiren: Mhm, but too small last time to have enough of def for a WW. Turks and Arabs will not be as many as last time, Russians is splitted, it’s only Dacia left to form a big meta.

Thomas: Yes. What we saw was: If we fight russia, dacia seems to win. If we do the other way what will happen? Russia got much smaller last finals. But I heard they will be bigger next finals 😉

Dacia seems to be the biggest meta right now. Turks seems to be divided, and Arabs, well, I think their organisation is the problem (also turks). About PT and Prime I’m excited.

Safiren: Turks and Arabs got so many bots deleted that they have to learn to play without them

Thomas: True. I don’t even want to know their real number.  Imho they will not play any important role in finals. Only if they join an organized big group. It’s good that Travian is working for more fairplay. But still it is a long way.

Safiren: Is there any fights at all going on this server?

Thomas: Yes. To my knowledge there’s an intense war between the German allies (Dogma, Troja, FC and LF) and NB. But we see less reports. I think there are some border conflicts at SPQR sector, but nothing special to talk about. We as NewOrder have some fights with Thais and mostly versus non-organized groups in our sector before.

Safiren: What about SEK and Q?

Thomas: SEK is part of us. Q I expect they play on their own.

I think if SPQR would be more active, this server would have a lot more dynamic but it’s not the case.

Safiren: I believe that both last qual and Final was so intense that many wanted a lazy round this summer. And on most server there isn’t a problem to qualify.

Thomas: Yes. Same for us and I can understand this. It’s also summer and as you said: To qualify isn’t a problem.

Safiren: I’m also taking it easy, it was a hard work even to be reporter 😀

Thomas: Hahaha. It’s enough work to even organise a full ally in a serious way. I don’t even want to talk about leading a meta. It’s only working if all play together. Our vision of an alliance or meta is, that we all act as one account. That’s also a reason, why we will never see a real competitive german meta. There are too much differences in the idea how to work.

Safiren: What is your opinion about the server?

Tobias: Its difficult to say, this server is a little bit strange. Neworder controls SW, Italian controls SE. Some German Alliances and Chinese have a nice fight.

Neworder and Italian are allied. and I think they have/had a special agreement with Chinese for a long time, maybe this will be broken now but for more than 50% of server time, I haven`t seen much action between Italiy/Neworder and Chinese.

So: this server is very strange.

Safiren:  😀 and where in all this are you?

Tobias: we are part of the German alliances, which make the most of action against Chinese around 0/100 area, so we have “fun” in 0/100 area against NB and sharp luk.

NB joined this war, after sharp luk lost many offense, defense and some village against our german alliances.

Interesting is, that Italian conquered ww 0/100 a few days ago.

Safiren: And Neworder has two too now. And LOV also one.

Tobias: Yes but I think, they only wanted offense points. Most of their points are from attacking natar villages.

Safiren: It is easy to get the impression that this is a server where many don’t even bother to play – only keeping accounts going so they will qualify.

Tobias: I think many of the accounts started with this goal. It is a great summer in our area. Who will not enjoy sun, swimming pool and so on. Travian should think about it, to start qualification not in the highsummer of most of the starting countries. Would better, if qualification start is in spring and start of finals in autumn, so you lost not much days because of new year freedom and the religious partys of most of the players (muslim, christs, etc) will be not interrupting the game.

But I think you wanted to talk about this server, we lost the main topic (chuckle)

Tobias: But the answer, why at this server many accounts (not only in german alliances) are only have the goal to qualify is this hot summer (lol) After the draw, everybody who play many finalservers should know, that this server must be the easiest.

Germans are as everytime not playing in one team. NB is a great group. Italian join (without was drawn) and BR+PT+NL are not so many players, to have an equal base on players as the other drawn nations.

The german group of the north did one big mistake before the start, but I hope they will learn of this mistake.

Safiren: What mistake was you talking about?

Tobias: To split in NW and NE, it was clear that chinese will join NE, so it was clear that chinese and the german alliances will be in war the whole server. Now you have not much fights in the south of this server.. and the two biggest groups of the north are fighting the whole time. it’s perfect for the south allied groups of Italian and Neworder

Safiren: I saw Dacia K is here too, but only 12 players

Tobias: Yes, G&V the same, they are not as much as needed to be a big enemy for the other nations.

Safiren: I’m trying to do the maps so I can understand what you are talking about. I have most alliances down to 5 members.

Tobias: :O  you have to much time (chuckle) or your summer is not as hot as ours

Safiren: oh it have been too hot, that is why I’m so late doing Germany.

in SE around 90% of the players are italians

in SW many are Neworder + SEK (german alliance) and some other. some of them are now allied with them.

NewOrder and Italian are friends since last Final.

Merak and some other brasilian (like tugahina) are in NW, but not that much fights.

and now you have to look in the south and you know what i mean, when I told the south have not much action because I saw only of LOV some attacks against Chinese.

Safiren: I think you are the only one that haven’t said something about chinese and multies.

Tobias: I know that they used some, but if they need them to win. I don´t care. Yes it is not “fair”, but can you promise, that in no other group someone have got multies?

Everyone who play as much finals as I have, know that not only chinese uses multi accounts. So you have to solve this problem, if you saw it. We had farmed the multies of the chinese in our area, so they can not profit as much as they wanted.

Safiren: I want to use the picture you did together with the interview so tell me what you think about the server 🙂

Andi: I think on the server are many real huge hammers. Italy and China wait for building plans and than will start ww-hammers. Much NB players was banned for some time, so they use illegal tools and multiaccount farming, it looks so strange what they do.

Its not a good server, to less action between the other nations. NB is in friendship with nearly the hole server. Italy, I dont know what they do, but still waiting for….. whatever.

Safiren: Yes I saw the picture you made for me, it looked nearly as Arabs ally list, all belong to the same meta. Italy says they are inactive and now they have 2 WWs =) 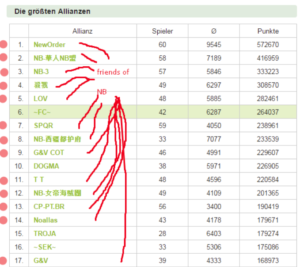 Andi: Yes, for NB it is no secret, they write it in the ally profile. I wonder that Italy take WW at 0/100 in NB area or only for offpoints? 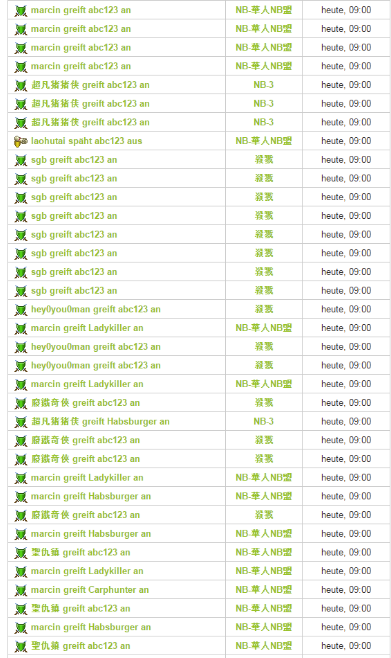 Since two weeks, everyday fakes and spy, 9 o’clock. Only fakes, this look like a robot or some poor people are arrested for this. Really, everyday, like a machine.