Statistics is from Sunday midnight. We hadn’t passed 8000 players yet but it is notable that that players are really active. The tribes have good proportions too. More romans than usual but it shall be a tribe for more experienced players, which we have a lot of here in Final –  and pretorians is also good defence. Gauls are less than they use to be, probably an effect of the better bot detection tool in combination with less wildcards.

I clearly was wrong about which quad that should be the smallest, but with 2 metas there it might not be so surprising. We have new constellations, but more about that in War diaries that will be posted on blog.travian.com on Friday. Let us establish that this years playing field is built for border wars, only in SE we will have fight for the dominance in the quad.

Edit: I prepared this yesterday and today it seems that the meta in NW after a quarrel between Emerik and Cicik now is divided in two parts, Dacia and Turkey. War is promised from both sides.

Saturday morning before noon we had our first second village, by  a team, Katarina Dacia K, that really know how to do it.

Safiren: This is the third time you are first with second village in Final (2015,2017). How long time did it take?

Safiren: How much gold did you spend?  and on what?

Gabi: That is dacia k zone according to the Meta NW map .

Safiren: So you had a lucky spawn then?

Safiren: I guess you had other accounts helping you to clean, did they buy cages too?How many times did your hero die?

Safiren: I read last year’s interview, did you get cp from dailys or did you have to party?

Safiren: Last year your fields was on level 3.

Safiren:. Do you have the same co-players as last year?

Safiren: Tell us something about your team, age, gender, how long  have you played travian /tourney? What do you do in real life when you’re not playing travian?

Lucian, 36 years old, mechatronics engineer.These is his 3nd tournament and he started playing travian from 2007.

Last Q: What gift do you hope to get from Santa Claus this year?

A reward will be posted when I have remembered to bring home envelopes from work..

I counted the seconds two times, first Sunday at noon and I found 30 seconds villages.

I counted again at midnight and now a lot of settlers had been running.

Tuesday morning when the stats was updated again we was up to 2670 as you can see above.

Uollas shared their map where the they have their seconds 🙂 They are prepared for a fight against the NW border. 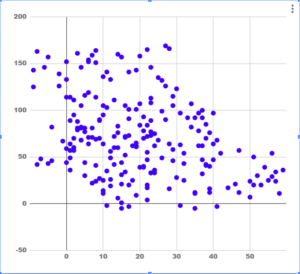 Gladiator helmet was down to down to 16000 midnight Sunday.

Lordleonidas and Underdog fought for the Top medals on climbers and robbers but Lordleonidas got a third medal on attackers. Well done 🙂 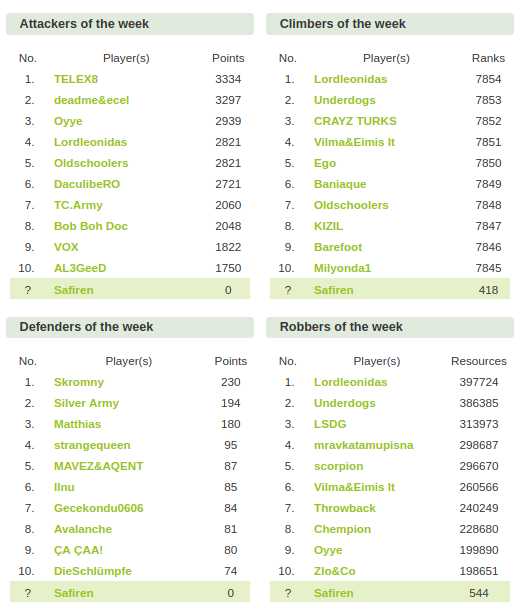 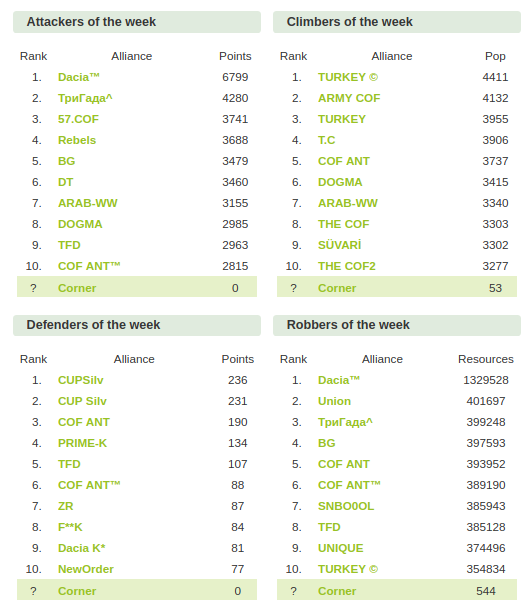 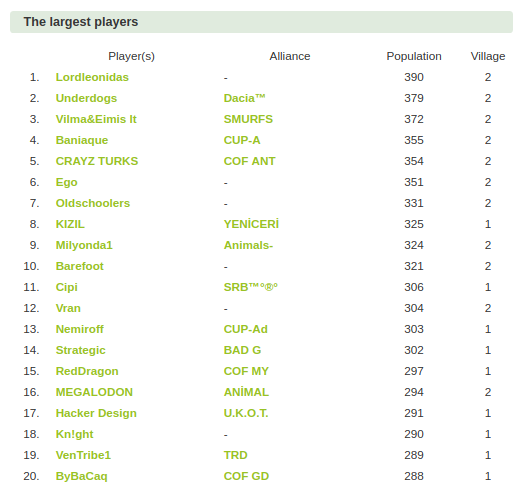 Turkey alliances built up their alliances very fast and it took a while before other alliances managed to climb the list. On Sunday midnight they was still dominating. 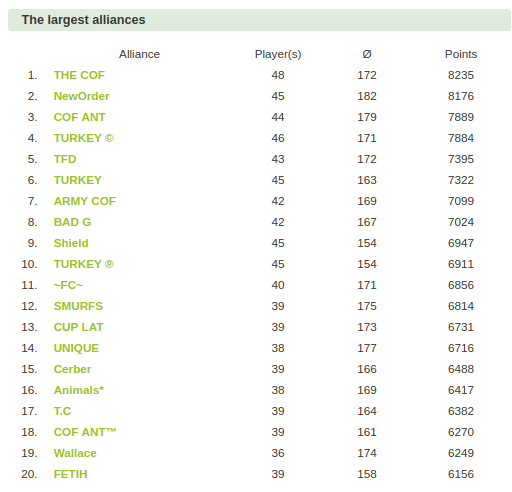