I hope you will find my newspaper interesting and informative. It has been a bit hectic to get this running, it is so much to check and organize in the start. I have gathered a Corner team that speaks different languages, it’s not complete yet, but it’s a start. I hope that will make it easier to get information about what is happening on the server so we can forward it to you :

I haven’t time to write a longer essay now so let’s start with the maps. Don’t take this maps too serious. What I want is to give you a picture where the different nationalities have spawned. In future editions we will look closer on  the meta diplomatics results.

Here we have the Gallia meta from French qualification. 304 accounts. Indonesia 187 accounts and Germany 105 accounts.

If they all cooperate we don’t know for now but 629 accounts in total. 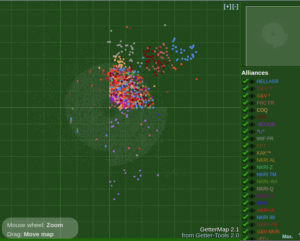 The turkey alliances in NE is  495 accounts. 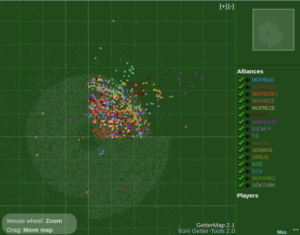 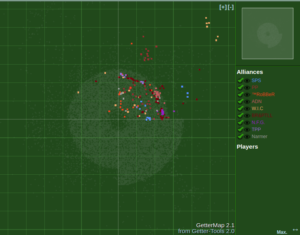 We start with Poland, 336 accounts. 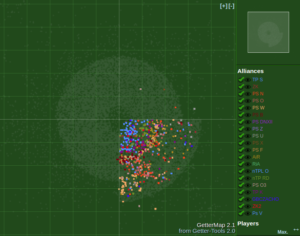 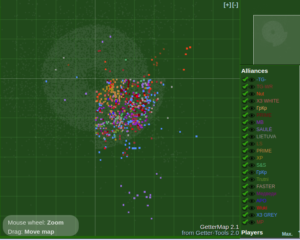 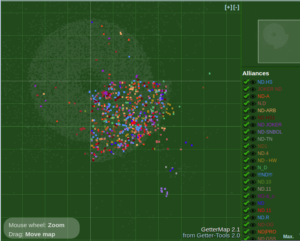 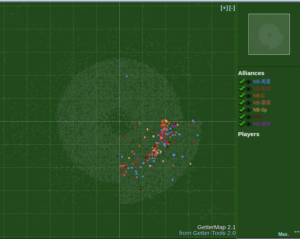 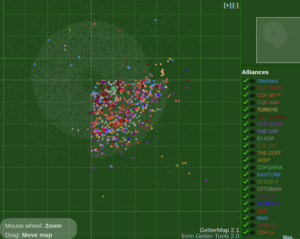 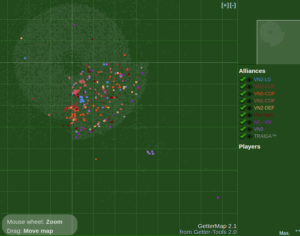 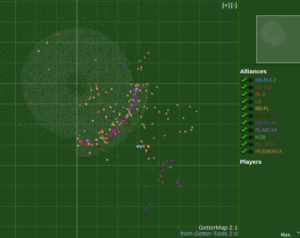 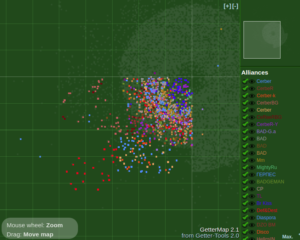 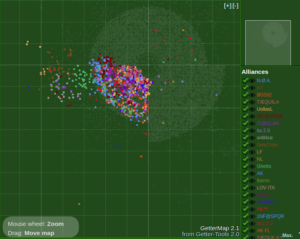 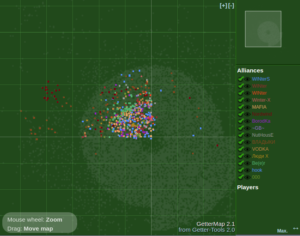 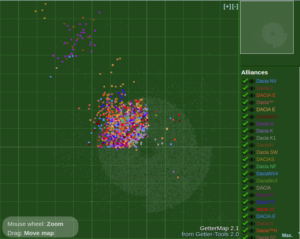 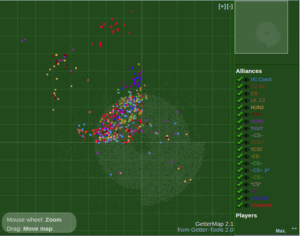 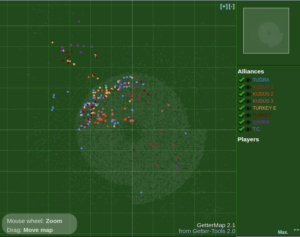 Portugal and some other alliances 144 accounts 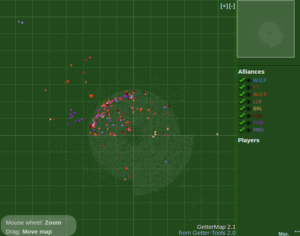 1. Congrats to being first with second village. You farmed a lot. How many friends helped you with cages and heros?

Thank you. It’s our style to settle 2nd village in top 3 on each server where we are playing. We have some friends with who we are playing for years, very good and dedicated players. My hero and around 7-8 other heroes attacked for 48 hours non-stop and they died for several times.We spent 100K silver for cages, and we had maybe 50 cages before the auctions started.

2. Did you kill your own hero? And how many times in that case? How many troops did you have?

Tuesday night we had around 100 clubs and Thursday night around 150 which was maximum.Our hero died two times in 48h.

3. Which buildings was the most important for you and which levels? Did you party? Did you build on fields, levels?

Academy, Main building, Residence. We didn’t received culture points on daily missions, so we needed the academy and the town hall for party.We had the fields at level 3.

We bought the helmet after we settled the second village.

5. Tells us about your account, How many duals, male, female, age. What do you do for your living? Do you have any hobbies? Which music do you like? Movies?

We are three on Katarina. Me(Shevcenko), 22 years, student. These is my 3th tournament and I started playing travian from 2009.You told me to say something about me , what do I like, what is my hobby …well…I like beautiful womens, and my hobby is to make them smile when they are alone in the night and there`s only thought is about me. I’m joking =))

Gabi(l-g) 30 years old, automation engineer, These is his 4th tournament , and he started playing travian from 2006.

Lucian, 35 years old, mechatronics engineer.These is his 2nd tournament and he started playing travian from 2007.

6. Have you learned the importance to not use the same passwords on different servers? And have your dual on the other server changed his now? =)

All passwords have been changed for safety, however we are sorry to know that our friends , the Italians , where the only ones(maybe not the only ones, but they was first with the comments) that have made bad suppositions about my account.They probably forgot that we supported each other in every tournament they played. Our motivation came after long hours that we could not play and we need to be more active and courageous, we have to play much better than before.

T-shirts on the way! 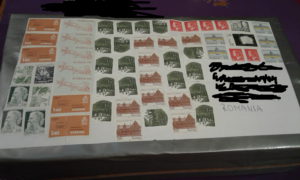 I would have missed this if I haven’t seen a link in my FaS chat. I like the new forum but it is so full of information so it is easy to get lost.

The story is that Templar Knight posted a challenge in the Event and Contest section on International. Who was willing to start late and how would that go?

I contacted him and asked a few questions.

Have you played Tournament before?

..how did you get this idea with a Final challenge?

What kind of player are you? And how long have you been playing Travian?

Off player and I have be playing for 7/8 years. I’m male 24  and I enjoy travian. Part if the challenge is to play without gold. So no idea how it will play out.

I don’t think it’s so big disadvantage to start 5 days later. You get a bit out from the center which can be good. Most players don’t get a cropper in any case.

It is a secret where you spawned?

Nope, SE. Name is tks challenge. No secret at all.

Well I wish you good luck with your challenge 🙂

As always the first auctions is crazy. Lucky are the players that are first to  get  desirable items to sell in the early hours. Even ointments and cages go for huge amounts of silver. The most valuable item is the Gladiator helmet and the bids on that one is stunning and cause a lot of comments in the chats.

The first item in auction was ointments and it was visible when it was 10 hours left. I’ve lost that picture somewhere with a single item, looks a bit weird but it soon got company and here the first auctions finished. 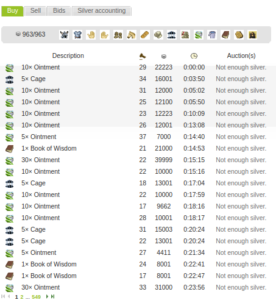 A couple of hours later the first Gladiator helmets arrived. 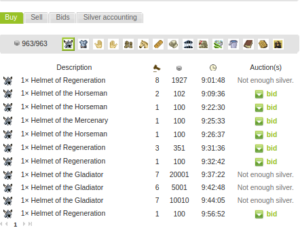 and the bids immediately went up way beyond the most players limit.

But that wasn’t the most expensive  Gladiator helmet. An hour lately one was sold for 490K silver. I had a picture of that one too but can’t find the right chat.

I don’t like this new version of skype that I’ve been forced to use, it is miserable for Linux users. I need to remember to save properly immediately when I get pictures from you and don’t wait and think to do it later.

Not all spends their gold on helmets. This guy bought a lot of ointments and books 😀 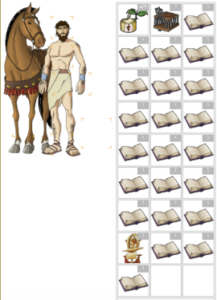 I tried to find one of those players that earned so much silver but failed. I promised gold but it didn’t help – but I got a lot of tips who might have been the buyers, thanks  🙂

I’ve sold items myself, the best was a bucket that went for 11K silver. In total I’ve got 189 gold so I could buy Gold club, I like autoduck. Plus to  be able to check what happens with the croppers  now in start and to be able to npc when it’s time for the last levels on Trappers.

Many have asked about the buildingplan coords. And as we all learned last Final it is essential to know them and plan for them from start so I repeat them 🙂

I wrote to TAKTAK with compliments that MÜFREZE  did so well first week – but I never got an answer..

Congrats to all that recieved a medal the first week! 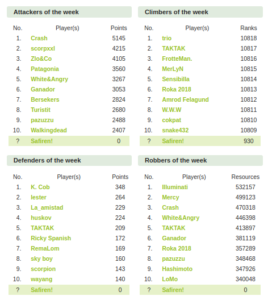 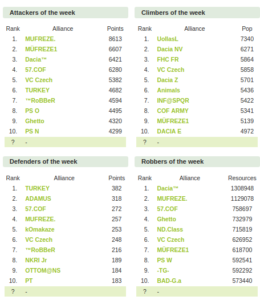 Dacia and CheckerB is supposed to be allied but Turistit tried to raid. Ivette followed him home. 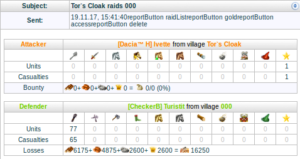 One in my team found this video:

And this was all for this week, I hope you enjoyed!

The Corner will be published every Tuesday at midnight.

Do you have news, reports, a funny story to tell? Who shall we interview?  Other proposals?

Contact us on skype/forum or send a message ingame to Safiren! (Yes a ! after my name due to a mistake I did)