Travian Tournament – Actions against Gamerule / Terms of Use violations

we’ve recently taken action against ~ 25.000 Travian: Legends Tournament accounts that were found abusing our Gamerules, We’re committed to providing an equal and fair playing field for everyone in Travian: Legends, and will continue to take action against those found in violation of our Terms of Use / Gamerules. Cheating of any form will not be tolerated.

If you believe that you’ve encountered a player abusing our game rules, please let us know! You can do so by opening a support ticket ingame.

The server is closed, too many complaints on Arabs and their multis, I’m informed.

This ally can be a good example, all joined the same day – all are banned. 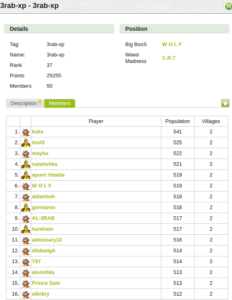 And the guy behind it got his pop halved. In my mind he should have been deleted immediately. 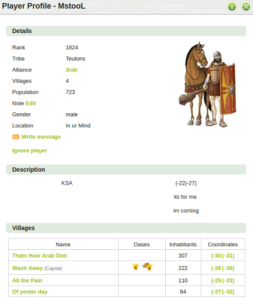 It’s not the only multi ally…

Maximum I’ve seen is 13K players, down to 10K now. I think the right amount of players should not be more then 6K. The map don’t show the usual pattern of removed multis. 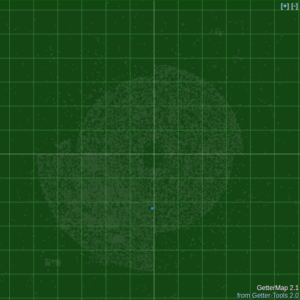 I don’t understand why the others servers isn’t closed yet. It seems to be the only way to stop this cheating.

Twice this message have been sent out to all players: 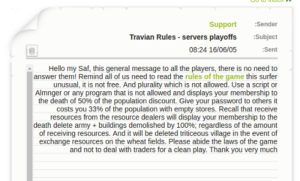 I haven’t got as many messages as last time about how to cheat with resources.

Maximum players I think was ~18K maybe 23K, have been down to 12K,now 16K. But it goes up and down all the time. 5K players can be deleted one day and next day they are back. I think 8- 10K players is a more reasonable amount.

MH started early to delete them but it must be a Sisyphus work..

Natars 3535. There will be more Natars then players in the end on this server 😛

I can’t find any evidence for the presence of Arabs here but many of the accounts I suspect to be multis have names similar to Turks.

This server is the most affected of them all. We was told that the “Invite a friend” option should be closed in Tournament but it’s still available. I wonder if that is the way in for the bots.

I have waited on MH to start working and the last days it finally happened.

Maximum players passed 30K now down in 16K. The real amount should be approx 8K. 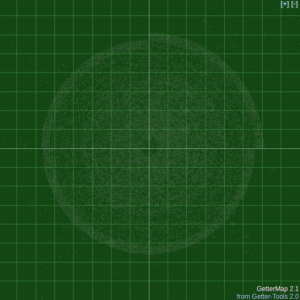 Natars: 5178. This server also will have more Natars then players in the end.

Here it begins to look more normal but still too many accounts that probably are multis. 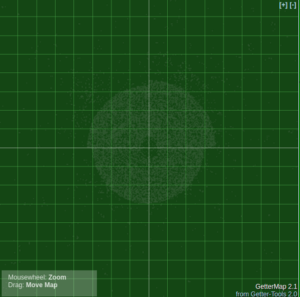 Similar to Russia but MH haven’t done much yet.

Maximum 8k players and we are still there. 5K should be more true. Map shows that some cleaning have been done. 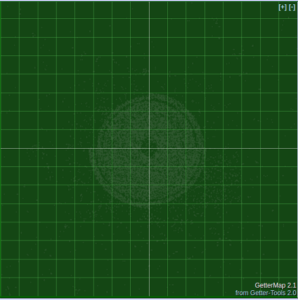 The same as the two previous servers. MH have some work to do. 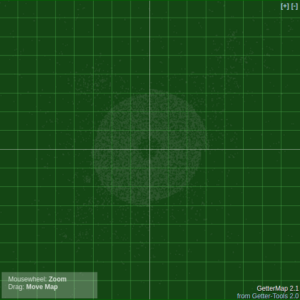 If I look back on the past qualifications around 500 Natars is the average amount of Natars on servers that have a more “normal” quantity of multis.

International have still at least 25% multis. The Arab clusters in SW is probably made of many multis

Arabia. I wonder if the bots will start from centre again when they have reached the border..

Turkey still have a lot to do. Probably half the server is multis.

Russia have cleaned up well but still to many players I think.

France, still some cleaning to do.

I’s fascinating to check the cleaning of multiaccounts on some servers – and MH is not done yet. I have wonder for a while if some servers don’t want to admit the amount of cheaters but last week shows some big changes. Turkey and Germany have at last make some effort to delete bots. If Turkey  deletes another 5K their server also will show a more trustworthy amount of players.

And the Arabian server – lol, their MHs looks to be in a frenzy mood, I begin to wonder if they will have any players left when this is done =) They have already more Natars then players.

International still have a lot of bots in SW. One additional Arab ally have been banned.  The players are quite irritated because Arab players that is banned several times for cheating still are allowed to continue to play after punishment. If a player shows such a disrespect for the rules they should be deleted immediately.

Maybe all servers shall use the captcha system to identify bots. It should make it easier for MH. For now it’s only done on International and Arabia.

International will ends soon and  it’s time to count those that will qualify. This server with the long story of multis made me take a look on how many Arabs that will qualify. After a couple of whole allys was banned and deleted the Arabs stopped to make allys for their “support” accounts. So I have checked every player without ally in Top2000.

I guess you will not be surprised that 95% of them was located in SW and in clusters around active ARB accounts. Arab leaders says that all use multis, if they do they are not as easily to find as this ones. The most detestable is if this accounts will get a ticket to the Final and I guess it is too late now for MH to act.

In my opinion players that abuse the rules in such way shall be banned from further playing.

First out is Khal Drogo with his 51 “support” accounts (I might have missed a couple). ALL those have in common that the first village has account name, the following variants on 8, 88, 888 or 13, 1313, 131313, or similar combination of numbers. All have been inactive for a while, probably since they have reach enough pop to qualify. 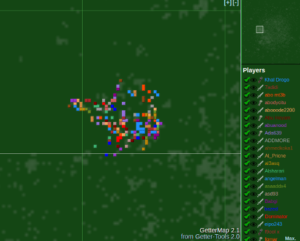 Next cluster, over 80 accounts, have several ARB top players inside, E.S and Noizemaker for example. The support villages here have in common  account name plus a number on the villages, the last ones is only named New village.  Many supports is still growing but some of them is banned. To be fair some without ally in this cluster looks to be real players.

Next cluster, over 75 accounts, have several ARB top players inside, E.S and Noizemaker for example. The support villages here have in common  account name plus a number on the villages, the last ones is only named New village.  Many supports is still growing but some of them is banned. To be fair some without ally in this cluster looks to be real players. 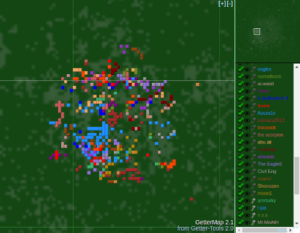 The third cluster with over 80 accounts without ally has for example such notabilities  ShNayDeR inside and a part of ARB- beside including pace. The significance here is that after the first village with account name many villages has names as hkk, ijjhokj, hgjfdjgwjk, more letters for every village. or account name plus a number for each village. There are accounts here too that looks real (some). 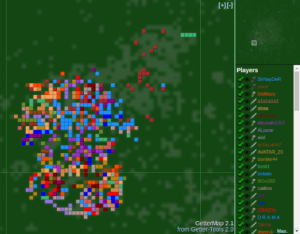 The last players without accounts in SW is the ally YNWA (isn’t that a Turkey allyname?) where all first and sometimes second villages have an Arabic name, all have been inactive for a while. The cluster far down makes me curious, all villages are numbered in the same way. 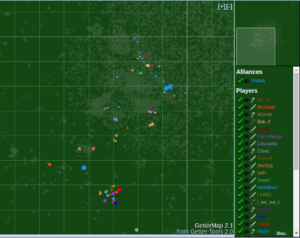