There will be a different challenge to play Qualification 2015. In a movie on youtube https://www.youtube.com/watch?v=iqdRN… TG says that they have chosen the participating domains among the most populated. International and Arabs will have their own servers. 20 chosen domains is divided in 5 groups with one predeclared host for each. 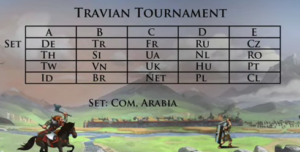 Com International: I wonder if more players will choose their national group with this constellation. It will still be a hard server, at least 10 villages to qualify.

Arab Arab Emirates/Saud-Arabia: It sounds wise to put the arabic servers together. Then TG can concentrate their multihunters ^^ A server with usually 2 blocks, might be 4 know then. More interesting :). Stubborn farmers but easy to def (very fun). A lot of spam. Polite players.

Group A: Germans is host for this group. They thinks they are the best players and know everything about the game since its a german game 🙂 They are good for sure, usually not many players but nice teams. The 3 domains from the eastern sphere contains some very good teams but due to lack of gold also vulnerable for farming.

Group B: Turkey as host. TR is always a hot server with many alliances that fights against each other. I could trust that my neighbors will come on visits, never boring 😀 The 3 other domains is usually aggressive but also in lack of gold.

Group C: France as host for Ukraine guaranties an exciting server. Spain have aggressive players too. I don’t know much about UK but they was early with playing as germans was and have many good players/teams. France is usually the most expensive server next to Scandinavia (the server with least players that spends most gold but obviously not enough to be one of the chosen 20).

Group D: Russia as host for Poland, Netherlands and Hungary. This must be the absolutely hardest group of them all. And let me guess who will be forced to cooperate to get enough numbers of players to survive the server. I wish you good luck!

Group E: Czech is host. The weakest group. Lack of gold on all domains. They compensate with cheerfully fighting.

How many players will qualify on each server with this new setup? I can only guess. Will they try to reach their maximum again, 30.000 players in Final, or go for more modest 15.000?

I hope they don’t continue with the possibility to qualify trough off or def, at least not in the former way. The players got the wrong impression on how many that could qualify. More adequate information should of course do 😉 A simple “or” is enough ^^

If TG think they can handle it they will go for 4000. With the problems with the last Final in fresh memory they have to be very sure for that.

Fun with a new setup for the Tournament! We need new strategies. This can be a very nice round 🙂