Here we have one more, BAD slaughtered at the walls of Zalmoxis Wrath, Dacia:

Added: This one was more successful, The village was destroyed and one more off village I’m told.

Added: They must have had a busy night at Dacia. http://travian-reports.net/us/report….

And so some rumours. Chinese thinks they have beaten WINter – and it is true when it comes to WINterB where almost all players have deleted. WINters around their WW at 100/100 still seems to thrive.

Vietnam thinks that Turkey will lose and after the defeat in the report above they use their hammers to kill scouts in oases. Not a behaviour I appreciate.

Arabs thinks that Turkey haven’t realized that they have lost already. All their hammers used on Russians. I think that it is always hammers left. It’s soon time for building plans, 11 days left.

The def in building plans have been the same for 2 years. No guaranties that it will be so this year. 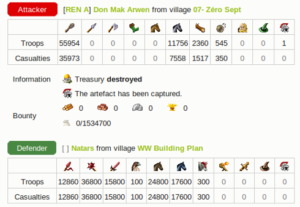 Beauty&Beast zeroed the WW themselves. No explanation was given to me but if I shall guess I think that they have reach the same conclusion as I did in my WW review some weeks ago. Dacia/NE meta can only support one WW and Ben-Hur with his architect and supporters around have the best chance to challenge Russians. With Dacia WW zeroed players can’t be tempted to send def to the “wrong” one.

This is a report where a Dacia WWK village is destroyed by Russians.

The Turkey meta is falling apart. COF thinks they can hold a WW by themselves. Turkey have done well this Final in comparison to the past. They still have a lot to learn about what is important.

Some reports on Romanian forum: http://forum.travian.ro/showthread.p….

And reports from Def&Dest. Germans walls at Hallonpaj’s cap, a lot of catas waves also followed.