Usually I do a research of the server before endgame, but no time for that this year. I have now done a smaller one, only checking the Top20 alliances and added a few that might be of interest.

EU.meta has 8 allys on Top 20 so I start with a map of those allys  and some of their confeds in SW. 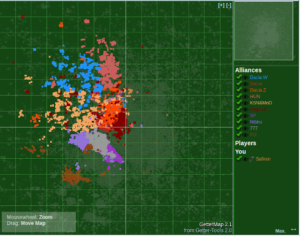 Dacia W is Top 1 pop, rank 21 off and Top 5 in def. They haven’t needed to cluster to survive. Most of their conquest have been friendly. I guess they haden’t many local enemies with that position on map. 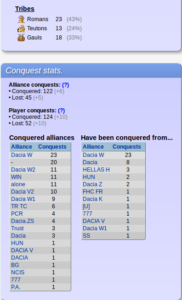 HUN Top 2 pop, rank 13 attacker and rank 172 def. Not many conquest, not many enemies with that position on map. 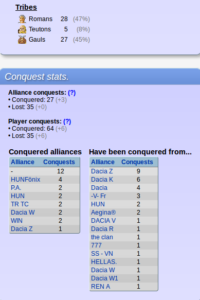 Dacia rank 3 pop, rank 22 off and rank 28 def. Dacia was nearer the centre and more clustered. Still most conquers is from confeds but also taken  from enemies.

Dacia Z, rank 6 pop, rank 144 off and 44 def. Clustered in centre. Hellas was a part of their meta but that changed in endgame. I don’t know if the conquers happen before or after.

KSN&MoD rank 8 pop, rank 23 off and rank 130 def.. The Turk ally TR TC that chose to settle in NW can’t had an easy server. Many friendly chiefings but also a sign of a border war with Italians, the clan and Angeli have conquered villages from them.

SP rank 16 pop, rank 36 off and rank 37 def. Ukrainians. An ally that have used their culture points to conquer enemy’s villages. Arabs have been primary target. The war with ND-TH (Thai) shows a slight predominance for Thai’s 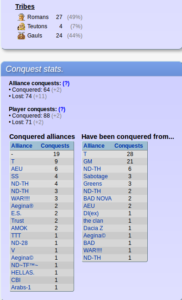 Nibiru  Top 20 pop, rank 18 off and rank 58 def. Also Ukrainians. Offensive with their culture points, especially against the Arabs

777 the 3rd Ukrainian ally in SW in confed with NW.  Rank 27 pop, rank 8 off and rank 13 def. Concentrated on Arabs but lost against Thai.

FU Rank 41 pop, rank 48 off and rank 67 def. Started in ND meta but changed to EU-meta, You can read about it in Comments<