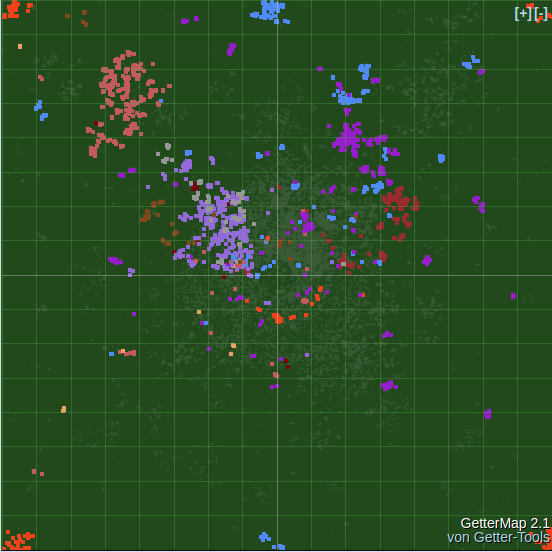 The alliances from Portugal/Brazil have the same problem to cooperate as the german alliances. Their biggest disadvantage is that they are spread over the whole map. Tuguinha has built a cluster and MI-F too – at 400/400.

No artefacts or WW.

Thai is also on this map, 3 alliances 67 players. They have a cluster in NW. 2 small and 3 large artefacts. The WW in their area taken by a solo NB player.

Yara: I called this server bots vs humans.

A rather uneven server would say so, where rules were cheated and what we saw was a festival of Chinese multi accounts, where even the German favorites had no chance and neither  the smaller alliances with less gold power.

Where the Chinese went, they were successful, but not because they were better at the game, because they made very visible strategy mistakes, but because they had thousands of multi accounts and gold power, which left the ones playing according to the rules at a great disadvantage.

What we have now are some formations of alliances and naps, like G&V and  NB with nap with TT and CP PT.BR in the northern quarters. The Italians have canceled their nap with the Chinese and keep their empire in the SE. SW – I do not have a lot of news, just that most of the Germans that were in the NW, migrated to it, due to inequality in the sector.

The Merak in turn continues the server as planned without allying itself to anyone. We continue very good in my opinion, with good scores and good classified in the rankings, for an alliance where I can say be alone against the server.

What can you tell me about the other Portugal/Brazil alliances?

Yara: Yes it’s just a nonaggression pact because we have friends there. We don’t play together.

As for the others, it is just the same situation as the pts / brs alliances pass every year, each goes to one side, does not follow a project and consequently our countries do not get anywhere together.. I know a large part of the members in them.

Disco zohan was a big friend of mine. It was for us to be playing together, they came to this group and to that quadrant at my invitation, but we had a disagreement at the beginning of the server and we ended up remaining separate.

Safiren: Do you know anything about this alliances?

Yara: They are thai people. TT, the main one, TTT was the reason for our disagreement, because the wing was being formed with players from all sides and with a German staff, a fact that later he corrected but … this third ist & tt is new, probably some alliance that joined them. Now they have a nap with the NB.

Safiren: Yes, NB have many naps and as I understand they plan to work together in Final.

Have you made any connections that can be valuable for Final?

Yara: In the last finals we played allies to winter, at that time still used the old name of the LLB Alliance, I intend to keep the same for that year as well.

Safiren: Is there any alliance you think is doing great on your qual (not your own) ?

Yara: They didn’t even have the habit of playing at the border. Because at first they came to me, as I said to our invitation, and then the reason for our separation was precisely to be dealing with the Germans and now I see allies with the Chinese …

Safiren: Why didn’t you like their cooperation with germans?

Yara: Because at first we came to go to war against the Germans and that was at the beginning of the server, we did not know that we would find there a barrier of multi-Chinese accounts and that these would become our greatest enemies. Not only ours, but of every quadrant, of the Germans as well.