Endgame is here and I will try to post reports about what is happening every day.

As my scouts can tell me it have been a busy day for all WW holders. Many small and medium hammers have been slaughtered against their walls with more or less damage.

The biggest hammer this first day came from Chip&Dale and will be rewarded with a T-shirt!

The first levels on WW is easy to zero but it will be harder the higher they go. But I wonder one thing. Ram hammers are rare. Have you forgot to build rams guys/Girls? Or are you saving them for when it will begin to be tricker to do any damage more than a few levels?

Yesterday I forgot the reports from Building plans. I was so concentrated on checking who will take the plans so it took a while before I realized I had one only 7 fields away. I sent my scouts and hold my thumbs that it should not be taken before I reached it.

What differs Building plans from Artefacts is that the amount of def have been the same for years. 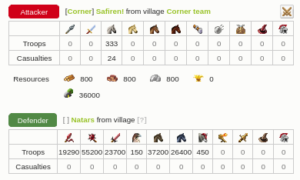 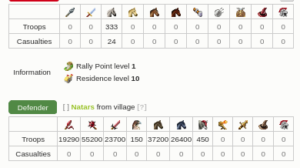 In this early stage the WWs will go up and down and it change every hour. This screen is from 13:20 today. SPQR and X3 have so far refrained from building on theirs. 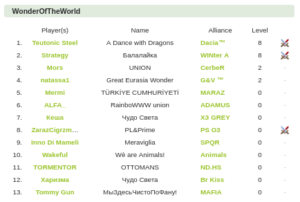 Midnight screen and it’s only X3 that haven’t started to build. Dacia have done best today even though many hammers had visited. Will they be able to keep the lead? 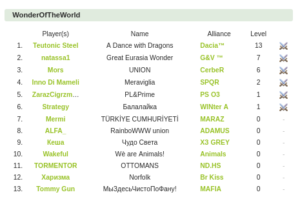