It have been nice to see all reports and I wonder how many hammers there can be left. It craves dedicated players to build those hammers. As last year the attacks on WW started immediately after building plans had arrived and the first levels was built.

The biggest difference have been more hammers and more def in WWs very early.

I haven’t done new meta maps. The metas still looks as they was from beginning with only small changes in the bigger ones – with the only exception the NE quad that that have been a mess when it comes to cooperation.

The Swedish ally SE started with the goal to build an own meta, fight the Russians and go for a WW – but all have already decided which meta to belong to before start so the only partner they found was a part of the split International which later turned to the Chinese meta. SE have skilled players and after many fun fights with Russians they was offered a NAP – or die. They decided to join the Russian meta.

Hellas was a late contribution to the NW meta. Placed at the border between NW and NE they become an effective blocker to a fully cooperation between NW and NE. They decided that it was more fun to fight local wars than for the common goal to fight Russians. As a consequence of that they was expelled from NW meta but then it already was to late for a cooperation to function. As it looks NW do good on their own. Partly there have been cooperation between French and NW.

Chinese tried to be friends with all in NE. That didn’t work well. A problem was that their player hadn’t understood the importance to keep to the agreed borders which lead to many local wars and a hesitancy if cooperation could work. They realized that one presumptive partner, Vietnam, had their own agenda but found a partner in the French that worked well out. To our surprise Hellas joined their confed when endgame started.

International split up in Final. We have players that choosed to play with Russians, with Arabs, going on their own – and broke again when Swarm left the NE meta and thereby got peace with Hellas. Hive merged with the German part of the EU-meta, which now have cracked too…

My patience as diplomat is gone since long, I have made more enemies then friends on this round. Maybe it will keep me from playing this damned game again – lol. I hesitated a long while before I decided to play this Final, when it is over I will turn of my skype to not be involved again. I look forward to a long summer without distractions, spending my time in my garden.

As it looks for now we have a winner already. Not much seems to threaten the NW meta’s lead. But you never know… Several of the smaller WWs have changed owners a couple of times. The clan hold 2 for a while, one conquered from Hellas. And now they have new owners again 😀 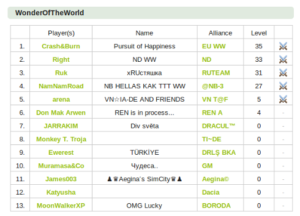