I’m late with the maps for SE, the smallest quad with only half as many players then the rest. The Family have settled here. I don’t know so much about them either than they are mostly from the other side of the world. And I think this is the chinese the russians looked forward to meet again as they was good opponents in the .com qualification. With all branches of NAPs counted 700 players.

I think the center will be even more crowded then last Final, not many moves out in the woods – or tundra as russians says. Last time there wasn’t a single spot free out to coords 50 I think that range will increase this round.

The main russian ally in SE is MightRU, a wellknown ally with a lot of experienced players. The question before start was if it was possible to settle second village within 30 hours with the new pushing rules.They made it in 31. I wonder if it had been possible to do it faster.

As I mentioned before some allys here have a NAP with russians in NE, but not with MightyRU. Interesting..
There are alot of smaller allies that seems to have some connections with russians, if only because their members have left for a russian ally, all of them is settled near the grey zone. Maybe 120 russians and 165 players with a NAP to russians in NE.

And yeah, some turks too but I have not added them to this map.

Next is to take a look on the Grey zone and the borders around. 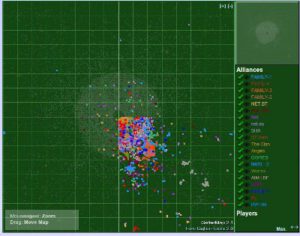 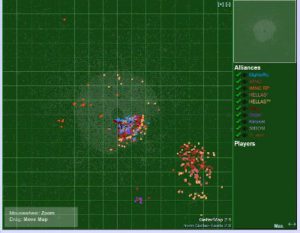