International as last server ended today. dolongdao for Vietnam got the WW to level 100 at 5:09.

I  asked my end game questions.

1.Congrats to your victory! Are you prepared for the Final?

1. Thank you! We are not prepared for the Finals at the moment, because some of our leaders plan on retiring after this victory. I hope, they will change their mind and lead us to another victory.

2. The unforgettable ally for all Vietnamese players will definitely be CheckerB (an ally with players from Arabs). Without their help we wouldn’t have won this server.
3. There are a lot of them, so I do not want to spam The Corner with those countless names 🙂

With a little change in the first question: Your opinion about the server? are you prepared for the Final?

1. After a long time an interesting server. I enjoyed it a lot.
2. Definitely DACIA.
3. From the entire server, certainly Emerik. From my alliance, I would like to thank all but most of all those who cared for the construction of wonder:
Mamuš, Oroniel, Hyperion, Sabatina, James , Torka and Monies.

1. It was quite competitive. A lot happened in 4 months, biggest thing happened is that Ghetto was born and we built a group to the finals so yeah, we are ready to kick some Russian butt. You will see organized Ghetto from the start there.

First of all big metas were disappointment here. VN had some beautiful WW hammers and also some coordinated attacks but thats it, I think all of us will remember their multi accounts and maybe spies, at least in our alliance. Having 4x more players and still needing spies and being proud of it (Message: VN sends their regards), idk what to say about it, no respect.

Hellas: I think everything you need to know is in Ghetto’s profile. I recommend to stay away from them. We were first timers and it seemed to be good offer to play with them but arxontas stabbed our back. I don’t think know if it was even a difficult choice, he must be used to do so.

Turks: Nothing against them, never talked with them that much neither played with or against them but having 2 small trainers and unique one and no def in WW also no WWK. That was a big surprise for me.

!!CS!!, S&G, A & friends: Most positive alliance/meta in the server. Their operations against Hellas were impressive, also the last one against VN x5 architect was a good one, unlucky you didn’t get that. I don’t know what to say, you were the best meta in qualis, congrats.

3. Promter I guess. Leading alliance alone and having same troubles as me, selfish players etc. I feel you 😀

1. Your opinion about this server? Are you prepared for the Final?

<<< I guess the server was quite usual for an international one. Same problems, same achievements, and almost same teams. Have to say, there was much less cheating than the previous round or rather much fewer bots))) And yes, I’m getting ready for the finals. First thing to do is to get enough sleep I guess.

<<< I assume most logic would be to say, me and my team will remember the Turkish meta. We fought through entire round with barely few days of a calm time. TheTturkish team showed great attacking spirit with quite a nice performance. We were pretty exhausted in the end and of course low on units, both defensive and offensive. I maybe won’t make a mistake saying it was for Turks the same. I’d also like to add some justifying words towards Turkish team who was accused in the end in not having wwks. Well, they would have wwks if they didn’t use them on us on a midway of the game. And they would have a good bunch of them, trust me.

<<< There were a lot of names in my head, also some of my guys. Especially Sherlock Holmes and Iglis. Both of them lost per two hammers in dramatic circumstances and yet they both found strength to go on and play a great game.

However, the most impressing for me personally was a young leader of Ghetto, Miko. They are a new team here and yet they managed to perform extraordinary for the newcomers. One can see it in their defence points. After last weeks of WW race I’m quite sure the large share of their success is his achievement. I do hope he will keep his energy, team oriented mind, and resourcefulness through the finals!
– And now good night! 😀 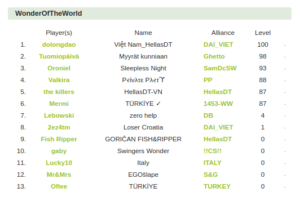 And with that my mission have ended for this round. I have counted qualified, it will get its own post. I haven’t used all reports I got the last days, sorry.

All in all it have been a fantastic round and I’ve learned to know many new players. I look forward to talk with you in final too 🙂

A special thanks to  my hosts on the different servers, you made my work a lot more easier 🙂

And now I move to the PreFinal Corner. You are welcome 🙂