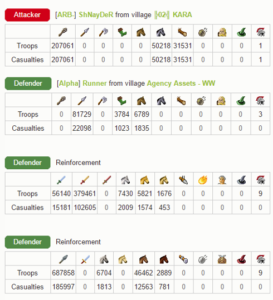 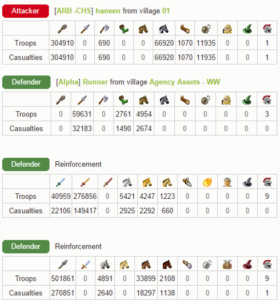 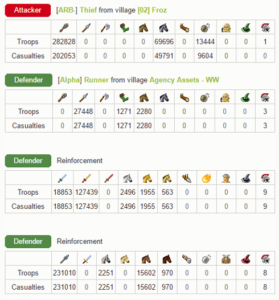 I have more reports from International then I can handle for the moment.

This is about Arabs attacks on Minka WW (CIN meta) 20 september. Nice with a fellow reporter!

This is roving field reporter, Ice Van Splatten coming to you live from the World Wonder.

The site of one of the most Epic Splats I have ever witnessed. Wheat was in such short supply that troops had to be seconded to Oases to farm for potatoes so that we could switch to Vodka production to keep the troops in good spirits. Those Tuets can drink!

Minka got word that the Arabs were coming back, and in earnest. The conglomerate came together like a well-oiled machine and troops arrived by the thousands. Quietly they went about their business waiting what was sure to be an Epic battle, one that would hopefully turn the tide of the server. Could CIN and its allies hold off the Arab threat? Would the wonder hold? With attacks raining in at multiple villages in the Queendom of Minka, could the threat be stopped?

The answer was quickly provided…

She flew one at the World Wonder village and headed off with a second to Marauders Map. I originally thought this to be just an odd Canadian thing, but quickly realized that she was flipping the attacking troops the bird.

There was nothing left to do now, but welcome the reinforcements and wait.

As the fog burned off the field between the Wonder and forest, the Arab troops emerged in droves, intent on doing massive damage to the Wonder and its buildings. In a well-planned strategic move a massive Arab army also emerged at Marauders Map, where Gibby was rallying the ambush that had been put into place.

The army advanced on Marauders Map intent on removing the artifact that would help protect the buildings against the thousands upon thousands of boulders that they planned to launch and the Wonder and its surrounding villages.

As the command to attack was given the gates of Marauders Map opened and the ambush was sprung. The Arab horde was quickly cut down. The fields outside the river that surrounds the city were stained red with their blood.

Phase one of ARAB plan had been thwarted, but what about the World Wonder village? Would it fair just as well? Gibby grabbed a CD player and set the mood in the in the arti town, while cleanup began as she headed off to check on the Wonder.

Back at the World Wonder, the second massive Arab armies unaware of their failure at Marauder’s Map launched phase two of the double pronged attack. As the signal was given to advance on the Wonder, an even bigger ambush was launched from the Wonder. The ambush was so large, that troops actually got stuck trying to exit the village.

The Arabs seeing the sea of advancing defenders, were dejected, but still fought to the death managing to set up and fire some catapults and managing to drop the wall by a level. Despite all of their planning and efforts, however, the Wonder, although lightly damaged remained.

The music started almost immediately in the World Wonder village as well as clean up began there as well.

Momentum tipped in the war…

BUT the war is far from over, there are still hammers left.

There are still troops to feed, and there is still a war to be WON.

Until next time, this is Ice Van Splatten, reporting live from the front lines…

International can be a never ending story, As far as I know there are still hammers left. 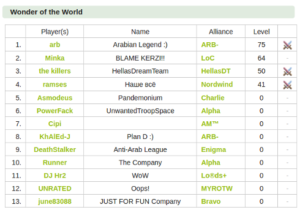 Lords attacked Arab WW. 5 levels down. Arabs also had to move their building plans and was stopped from building in 16h. Which gave Minka the lead. For how long? Hellas will land on Minka, on the plans, the strength arty and the WW at 10 am. 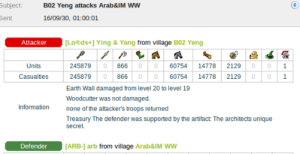 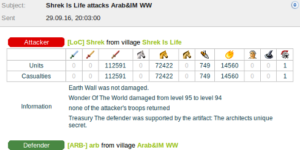 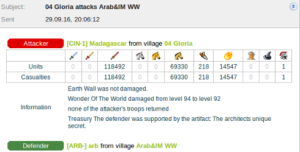 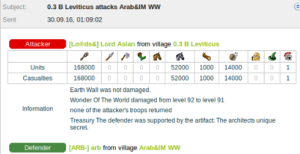 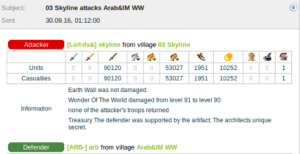 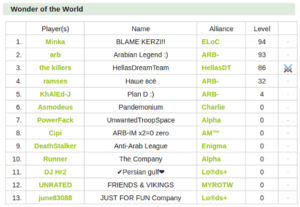 It has been an intensive day on International. Hellas attacked both ARB and ELoC. ARB WW was down from 94 to 78.

Minka on ELoC had attacks everywhere. The Architect was stolen, one bp moved and in WW the infrastructure was the target, The Company contributed with a well built ram hammer. 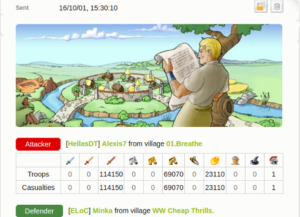 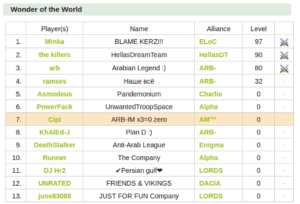