I’m sorry I’m a bit late with this but Kingdoms test started this Tuesday and it is a lovely little server. You can’t buy gold but instead you get 250 gold per week to use. You can’t transport them from there.

HellasDT won and it was a well deserved victory. They have skills and knows how to use them. I have personally experience of this. Last Final I had them as neighbours and they kept me so occupied so I hadn’t time to write my Corner.

The CIN meta was second. For many of them it was the first time on Tourney but despite that they did a good work. It will be interesting to follow their future participating in Tourney. Not so often new metas shows up. Usually it is more or less the same players and same allys.

Arabs on third rank after being the ones all thought should win because of their big numbers, but most of them showed up to be multies/bots. The early attacks on WW was a very smart tactic. They have learned from earlier Finals, and used this qual for practise, that you have to cluster and that early attacks on WWs is the only way to affect the end. 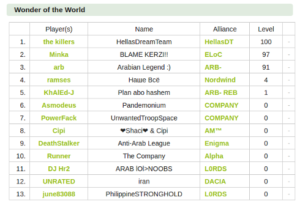 Map by Strategic: Yellow is Arabs, red is CIN meta, green is The Company and blue is Hellas. 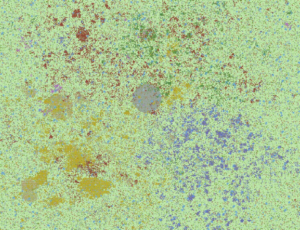