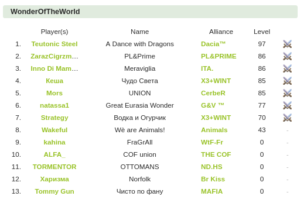 I had private business yesterday. A whole day without Travian! Can’t remember when that happened last time.

Teutonic Steel told me that Dacia will reach level 100 at 14:26 server time. A couple of hours earlier than I expected but I haven’t seen when they levelled.

CSA’s second run on PL/Prime took them down one level but it only differs 11 minutes between them and SPQR so the chance for SPQR to finish as #2 isn’t big.

It differs a bit more between X3 and CerbeR so it depends where in the cycle they are if they will be #4 or #5.

1. In fact, I expected a better role for Arabs this year, but contrary to expectations this time, the Arabs was bad, and also very bad. We were at first building our villages next to our WW, but  I don’t know what actually happened, we lost the area there and we also lost our WW.

In fact I had no reason but I wanted to take a WW and at least for Arabs.
And with the days my team planned to build it. but the building plans had another opinion.
For  the name, I was displeased of Arabs failure. 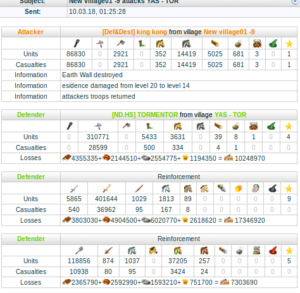