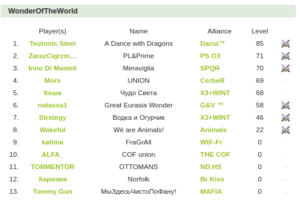 Dacia changed to level 85 just before midnight and that means it is 91h and 27 min left of the server. The end comes latest ~19:30 Friday evening. If I’m counting right.

A troop scouting on Dacia 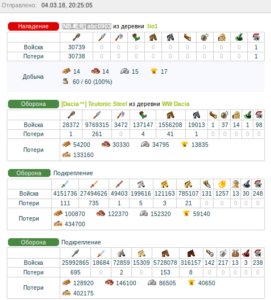 Thanks for your time, first of all I think that I am talking for all my italian player when I say that it was a very funny server.

1)Our impact was very important because  I think that this kind of server need another power team like Italian, because there is a lot of alliance but very few groups .
2) I think that the best things for Dacia’s victory was Italian in the quarter of Russian, because  a lot of players that in the last server played not in a dangerous zone, growing their account and their troops, this server have met a group of enemy near them and lost  their troops not only in the last day but in all parts of the server.
3) Russians are very great players, but they have either very strong players or bad players.
4)  I think that the NorthEast have been the weakest quad in this server because in this kind of server all  team of the other quarter love to see the battle, report, mission  and other things like this.  Things that you can not see in a quarter where there wasn’t any enemy.
5) The difference was the organization, according to me Poland was one of the strongest nation because of their leaders. It’s very difficult to find an alliance where good player have a great admin and when you have it, you make the difference.
6)   I want to say to my own player, that we did a very great server. We played against all and with all. We came in the quarter where nobody wanted to go.  We asked other nations to come with us and they answer us that ” We was fools” . Now  with a great pride  I can say that “A person with a new idea is a crank until the idea succeeds.” – Mark Twain

Safiren: Did you cooperate with COF?

Simone: Yes in the last part of server they sended defensive troops to our WW. We saw that our number  was too less to do alone  a WW so we asked  other groups to build WW with us. The only problem is that we  obtained this deal with COF too late so  there is not too much troops of COF of our WW.

Simone: Yes if we did not get a  2nd plan,  we talked with G&V to join in the same alliance. Now when G&V have only one plan  it is right to help them.

I am hugo234 from Hong Kong, chairperson of Tournament and Final 2017 Chinese NB Alliance. I also ask my committee, Abby to say more about opinion on other alliances:

Maybe some people misconducts Chinese NB team. NB team is very interested on war and killing enemy soldiers, but it is too boring and tiring to defence wonder. Also Chinese NB claimed supporting COF in Qualification + Final 2017. Therefore NB’s job is to protect area near 100 0 and attacking Prime, but no interesting on building 100 0. The honour of building 100 0 is given to COF.

My miscalculation is only the split of COF team. COF is split into COF + Mufreze + Adamus + other several teams after the start of Final 2017. All leaders of those Alliances want to be leader of Turkey Travian world. Therefore they can’t cooperate with each other. I was very disappointed with them.

COF + ND: I wonder if they are NB’s friend or enemy? They were defeated and raided by Russia, then they hide into NB’s settlement area; They did not allow ally to raid, but they let Poland and Russia to raid; They received NB artefacts, then those artefacts were conquered by Prime. They get 100 0, then required on conquering NB’s villages near 100 0. Actually I’m always worrying that COF will attack from the back when NB fight against Prime.

Some NB members want to say to COF: They are fXXking very stupid and make ally disappointed.

nTPl: I knew less about nTPl, but members of NB have good imagine on nTPl.

Prime+PS: Very strong and horrible. It is my honour to be their enemy. Personally I like Russia and Poland more than Turkey.

x3: Luckily x3 has conflict against PS. If x3+ Prime+ PS attack NB together, NB will be defeated very quickly.

nTPl : Congratulations to nTPl. They have done very well in their first match.

Prime: they are worth to be respected.

x3: Actually I have less contact with x3, so that I know less about them.

Hugo234: Victory is victory. There is no matter of deserve or not. Just congratulations on Dacia.

Abby: Congratulations on Dacia winning this match. I feel that some joint-alliance attacks are caught by Russia. Some improvement can be done.

Hugo234: SPQR is also part of COF’s union. Actually I hoped that COF can defeat Prime + PS, then we can aid SPQR from SouthEast to SouthWest. However COF retreated from urban SouthEast during Final 2017. Therefore NB is too busy to fight against Prime alone. I respect  the strongness of SPQR who can fight against CerbeR and BAD alone. I also feel sorry that NB is unable to aid her SouthWest ally.

Abby: The failure of Russia is caused by SPQR undoubtedly. I respect  SPQR.

Hugo234: Some alliances in northeast are playing simcity. They have no interesting on the Final 2017 world.

Hugo234: Wish all of you to enjoy the game and have fun!

When I had entered my bed I realized that I had forgotten the Top10 I had to ask Jay on HQ to give me them. 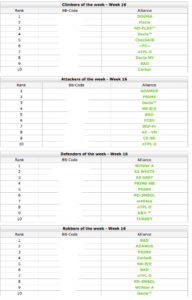