I have nothing to brag about, I failed in my mission to write about this server. So I’ve learned that I shall not try to write about two servers on the same time – at least when they are so different as Tournament and ROA is.

I also failed as independent reporter when I tired on my villages and gave them away. It changed the balance in a region and players got angry on me. A hard lesson, well deserved. My ignorance about how RoA worked is no excuse. I should never had started to build on my account if I wanted to be neutral.

Reviews? Every active player knows more about what is happening and the affects on the further game then me. You do an excellent work with interesting topics on the forum. Especially Ele do a much better work then I ever could have done.

Do maps? In difference to Legends where players seldom have a clear view of the map – ROA players literary needs to know every single settling of the other players ingame. What could my maps show that you didn’t already know?

Interviews? Takes more time then I have had – and besides that I couldn’t figure out which questions to ask 😛 I thought to do some last interviews but when Ele started her tread it was once again more informative that I could have done. I relaxed and enjoyed reading instead.

ROA had shown a bigger complexity that I expected. The teamwork on this server is not above the elite teams on Tournament but as ROA is so much smaller real teamwork is of a much bigger significance. I wonder what Murx should achieve in Tournament where there are many more allys like them?

Thanks for the hospitality you have shown me even if I didn’t fulfill my job. A special thanks to TM that protected me and let me join your ally chat both the first months and the last. You talked so much – and in ROA spam chat too – so I hadn’t a chance to keep up and understand what happened and where and why ^^

I have met many skilled and interesting players on this server. It have been nice to learn to know you. I wish you good luck on future servers and maybe we meet again – not on ROA though – I can’t play all sorts of Travian and still have a life outside the game =)

Congrats to the victory TM, it is well deserved! Congrats also to BA that managed to rise again and play a part in the end. Congrats to the remaining Lords for surviving the meta attempt and a “Congrats” to Murx for the unusual way to finish a server. 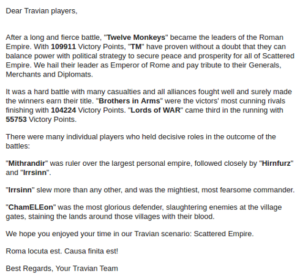 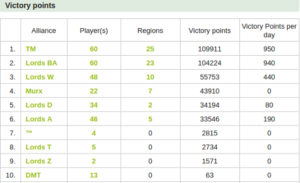