I asked a friend to be able to look at the server trough his account. I’m still trying to keep my promise to myself to not play – at least I’m very lowactive 😛 For the first time ever 😀

I didn’t even know that Gettertools worked but when I discovered I could not resist doing some maps and I want to share them with you. I know that many of the players never see the whole world and I think it’s good to know your surroundings at the bigger scale.

Xtools and Samurai. They have many top players that have participated since the first Kingdoms test server. That gives them a big advantage against the new Kingdoms players and that is clearly viewing on the map and statistics.

It’s a pity that Horde disintegrated. I had some hopes that maybe they could be a challenge for the old foxes . As it turned out most of the players merged with xTools.

I have made 3 maps. The first showing the 10 biggest alliances. The 2 others xTools and SAMURAI without NAPS.

Since GT seems to have a maximum of 127 players per alliance I’m not sure how exactly the maps is.

It looks as a lot of players have build as far out as possible but it is not the case. It only shows the border. NE is as usual the most populated area. So on future servers if you want to play as king and get a lot of governors NE is a good choice 😀 Of course many will think the same so it will be too many kings in the beginning *chuckle* 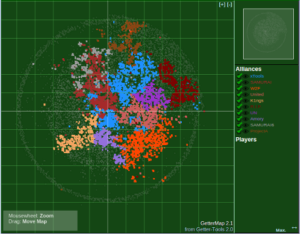 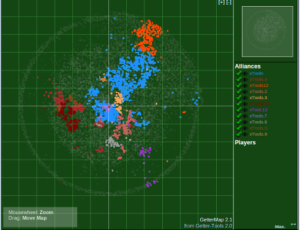 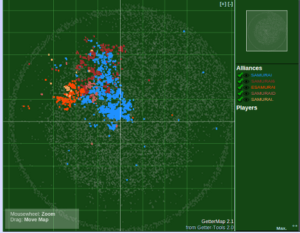