Czeck/Slovakia can’t have it easy with REN (French meta) and NB (China) cooperating.

A counter attack from CS against REN, but I think they have forgotten to build catas.

And todays stats, JARRAKIM going up and down. 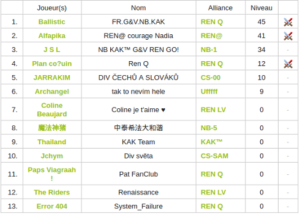 Mostly Natar attacks. One hit on RENQ with 9K catas but too little troops.

First WW not on 68! CS haven’t given up but do they have enough def for two WW? 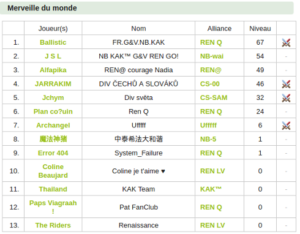 Alfapika former RENQ have been declared betrayer and accused to play with CS. WW zeroed. New ally with 3 members is called anti monarchie. I’ve heard rumors about internal quarrels in France. Not unusual when a meta is so superior so their members gets bored.

Safiren : You will be third to finish qual. You have been 1 level behind most of the time but you slowed down latest days. Have I missed a report where your GW was damaged?

Safiren:You have build a big meta on this server in prepare for Final I guess 🙂 How about the Greeks? You talked about cooperation in last Final. Who will be your primary enemy in Final? Is there more countries you wants to cooperate with? What is your opinion about this version of qualification?

Makaveli (K-rim): Well last mondial you’re at the middle of our problems and I followed my instinct to work with GV, KAK and Chinese. They were amazing and ideal partners with who we wanted to play. They know the real meaning of coalition and they are strong players in this game. We are looking forward to make this meta be able to fight and defeat others. Right now, we are not focusing in any others nation to focus on. We just want to organize better our meta and we’ll see how it’ll go. Well this version of qualif is interesting in the fact that it teaches us to start playing together before final so nations must understand that and have to work on it.

Safiren : We have Greeks on International, will they work with you?

Makaveli (K-rim): Well we are definitely open to those who want to join us to make this meta being really able to steale the victory from Dacia and arabics since russians lost a bit of their power lol. But we never had connexion with Greek who are playing on international. So I guess we’ll wait and see.

The report from level 96 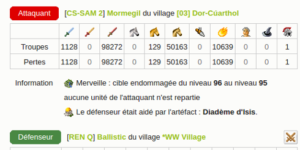 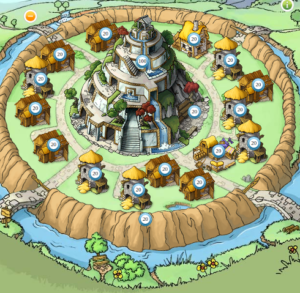 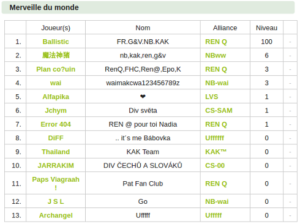