Natar def was the same on all servers. Lag in REN Q from France qual was he fist to get one after 28 minutes.  NeBoethius, CerbeR, Russia, was second after 31 minutes. RedSuns, THAI-X, Germany qual, took the third after 41 min.

After that it took a while before more happened but half was gone after 2 hours and the rest followed shortly.

On International Arabs decided to go on the other WWs instead. A big surprise that they used hammers so early. More about that later. I have some reports.

Cin-meta, including Enigma, LoC and Lords gathered 6 BP. Enigma lost their WW in the Arab offensive. Hellas + PP has 4 together. The Company, Nordwind ans Arabs got 1 each.

On Arabia no surprisingly 12 is owned by ND meta. A player without ally holds the last one.

Turkey have 11, Hungary and Vietnam 1 each.

Russia have all for themselves.

I liked the French report best 🙂

I got the reports how Franziskaner on .ru got his BP. NEBoethius gave me the link to the Russian forum post. 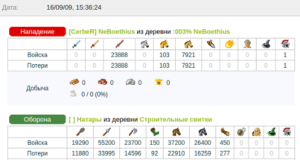 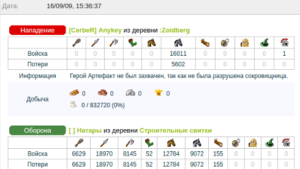