International have lost half its players to other qualification servers. There are some national allys mostly with small numbers – except for the Greeks- but most is internationally mixed. Probably all will qualify. So I was totally wrong. International will be the easiest server for qualifying.

The DI meta in NE is expanding and now controls both NE and NW. 7 allys on Top20. Concentrating around WW 0/100. 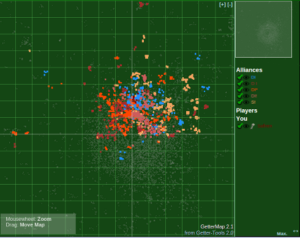 Legion was strong in NW but lost the war against some DI wings. 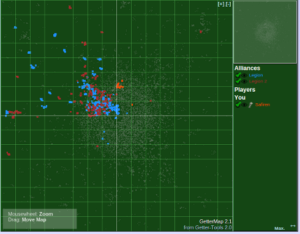 SW don’t have many Top20 allys either. No obviously stronghold around a WW. 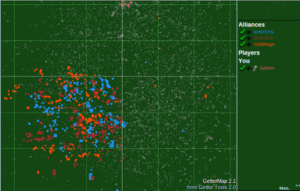 In SE we have the other big meta. HellasDT&Co. Greeks. The first to take WW. There are also an Italian ally, The Clan. 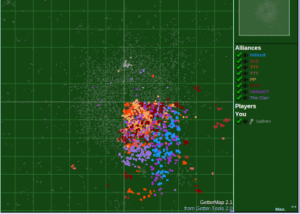 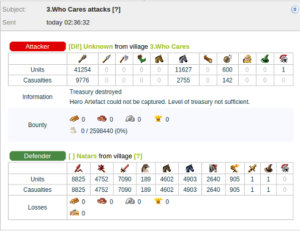 Many players but not so big difference in what is needed to qualify. 2 blocks, Siege in NE/SE and Arabia mostly in SW some in NW. 3800 Natars. I’m surprised I get no spam but my account might be too small, only 20 pop.

No maps, but due to the minimap Siege have been using multibots most frequently. Will that cost them the victory due to numbers? 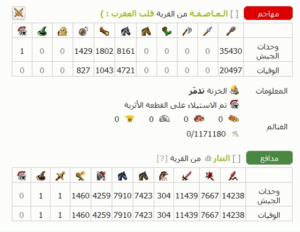 Germany server , Group A, consists of players from Germany, Thailand, Indonesia and Taiwan. It’s a bit hard to make out who is who from Asia because I’m not good at recognize the foreign languages.

In NW we have one sole Top20 ally, very few players compared with the other quads. DH – German. I spoked with CM-Blutengel and asked a few questions.

Claudia (CM-Blutengel): I think that it’s something else, but not bad. There are no difference if we fight against German or Asians.
Safiren: But this time you cooperate with the other german allys?

Safiren: I know since earlier rounds that it have been difficulties between you 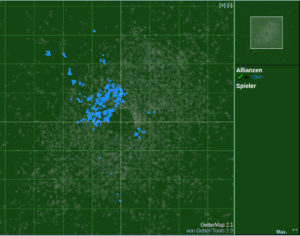 So we take a look on NE and yes it is very many Chinese allys there. Some from Thailand too and a German ally in a corner. NB looks to concentrate on the Grey zone. 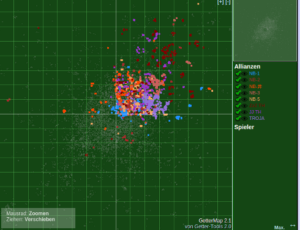 In SW we have two German allys and a lot from Indonesia. The Germans is well situated around WW -100/-100. 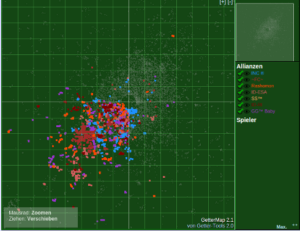 SE seems to have an Thai/International ally and there we also can find TF a German ally. I’m not surprised TF don’t belong to the German meta, They have always had problems cooperate with other Germans and had always chosen another quad to play in. KAK is also concentrated at the Grey zone border. 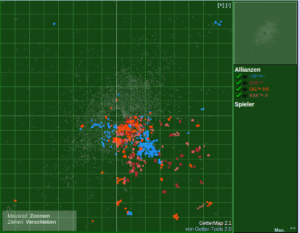 NB won their qualification in Asia last year and is a strong favorite this time too. But you never know, the need to beat them can make old enemies to become friends, thinking on the old tale my enemy’s enemy is my friend.

Turkey, Group B, is host for Turkey, Slovenia, Vietnam and Brazil.

Vietnam and Brazil in cooperation and a Turkish ally, Kara. When I asked for artifact I got this instead. Vietnam have fun being both Top attacker and deffer. Concentrating around WW 0/100. http://forum.travian.com.vn/showthread.php?t=51896

NE holds one half of the biggest meta, D&M. Looks more organized and strongholds around all avaible WW’s! Well, Turkey have always been a fun server, long lasting. Last year they managed to end server before Natars, for the first time in history I think. 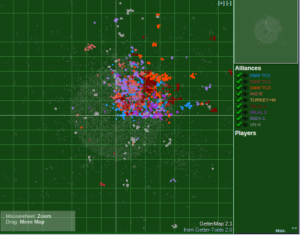 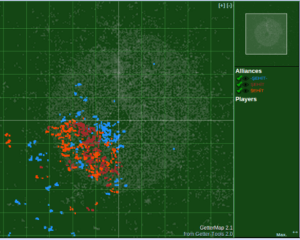 In SE the other half of the biggest Turkish meta, G&D. Splittered on map. A small cluster around WW 100/-100 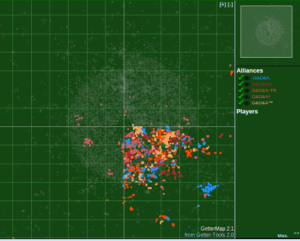 French qualification, Group C, consists of players from France, Ukraine, Spain and United Kingdom. I think it is South Amerca players here too . 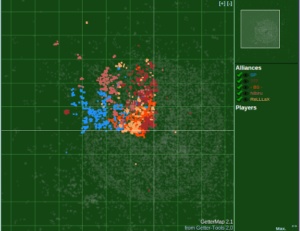 NE have 3 French allys. WW 100/100 looks to be their goal. It don’t seems as French have made a coalition, I know since earlier servers that not all French thinks it’s possible to work together. They are very hotheaded – lol. 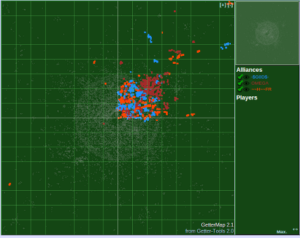 SW have a Spanish meta. They usually like to fight but their weakness is a lack of gold and many small accounts. They haven’t been able to clear the area around WW -100/-100 from enemies. There are still a French ally there. 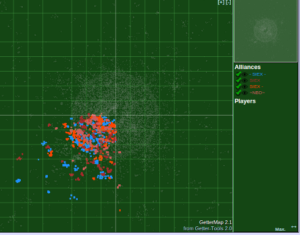 In SE we have a mix. Swedes, French and a Latino Meta, SHSN. The rumor says that ANTP cooperates with Swedes and Fear – and that LOL fights with everyone. I’m not surprised ^^ I also heard that Swedes have fun and took 7 artefacts. 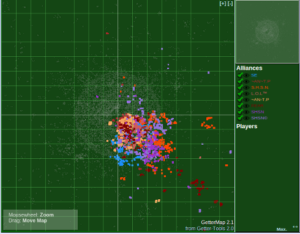 NW, the home for Hungarians, AVG. The foreign meta that have succeeded best but to splittered. Quad shared with a russian ally. 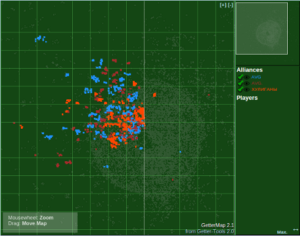 NE hostes the northern part of the ru-team. Cerber in top. Organized settling so it easy to assume that those not so organized is the enemies. Hungarians here too Calling their allys “Gameover” and a Russian ally, Crazy-re, that seems a bit rebellious. Cerber is around WW 100/100 and GM in Grey Zone. The WWs at 0/100 and 100/0 is also covered. 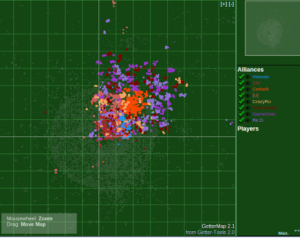 SW has two russian allys in Top20 and not connected to ru-team in profil. Maybe some more rebels? WW? Maybe Gray zone. 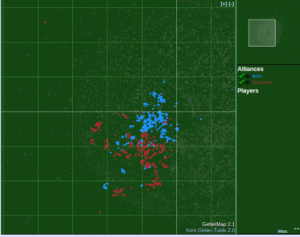 SE has the other part of ru-team, BAD meta, well clustered for Grey Zone. Boroda around WW 100/-100. Here we also find TH, a polish ally the old enemies of TP who don’t play this qualification. And of course the unavailable russian rebels – Nordwind.

Interview with ruk from BAD

1. What to you think about this new setup for qualification?
2. Which meta have the biggest chance to win on your server?
3. Why?

1. it’s definitely something new. and it would be better to have from the very first tournament on.
2. Ru-team most likely wins in the group D.
3. There are no obvious rivals of the same strength and organisation.

Interview with Jola from TH

Safiren:
1. What to you think about this new setup for qualification?
2. Which meta have the biggest chance to win on your server?
3. Why?

Jola:
1. I think it’s bad idea, because we play with russians, everyone knows they are hard.
2. BAD
3. They are the biggest meta in this server. 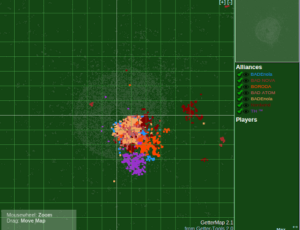 IN NW we have Ikcz and Dracula, part of CZ/SK meta and Wolfpack, Italian players. An ally from WTF-meta in Gray zone border. Wolfpack claims the area around WW -100/0. Ikcz the one at -100/100. 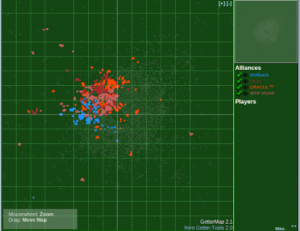 NE consists of known allys from earlier rounds: KSN&MOD and Dacia surrounding MET who have their stronghold around WW 100/100. 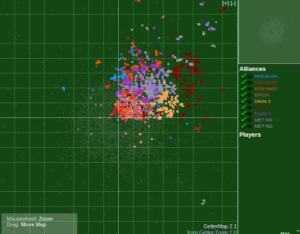 I think this setup helps upgrading the Competitiveness of the server, more similar to the Finals.

The numbers are just superior to the others allys, but we might have some surprise from the SW and off course the SE is dominated since the first days by the LATS so they have the possibility to have nice GE´s by the End game. But having war in the NE since the first days made this the most interesting quadrant and I think the winner will came from here.

In SW the main CZ/SK meta. Building to Grey Zone. 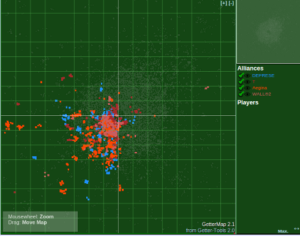 SE, Portugal/LAT is dominating the quad. 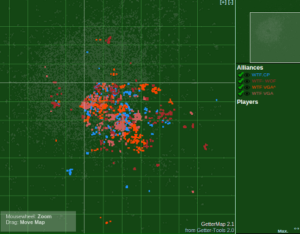