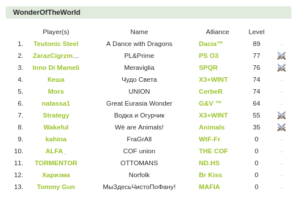 It looks as this is probably the final list if a hidden WWk don’t show up. I still haven’t seen the one I heard rumours about. If it is big enough it can achieve minor changes depending on where it will hit. Dacia is secured but it’s only one level between PS and SPQR. X3 and Cerber is also tight and take turns on rank 4. I guess WINter and Animals is the ones it that it easiest to take down.

[Dacia SW] zerofreeze made an attempt today to chief Tormentors WW village but failed. His hammer was far from enough.

Congrats to your coming victory! I hope you will answer a couple of questions.

Hello Safiren and thank you,

I have no doubt that Russian meta will learn also from this year’s defeat and they will come back stronger next time. As for Turkish meta I am still not convinced, they showed us strength and ability in qualification, but in the Finals, Turks had little achievements over the years.

Kind regards and see you all next time !

We decided playing this finals without any meta and naps.

Fun was priority for us.

So there was never an issue to join a meta.

4.They are 2 experienced metas and equalise one another.

I think they got fun too.

5 . Polen and Prime was for me the biggest surprise this finals.

But we are too far away to say something why the Rainbow Union didn’t make it.

We send answers, sorry for not perfect English

We tried to introduce as many of them to the finals.

We also had the foundations to build a miracle, but winning on the server wasn’t a priority for us.

Therefore, we were able to get the entry codes for the final server for most players facing  a large number of enemy.

PS – came to build a miracle, nTPl – fight with everyone in his style, PT – nobody knows why they came.

There was no cooperation with the PT alliance, they cut themselves off from our miracle – on which side they played – remains a mystery.

We regret that we did not start cooperation earlier, from the beginning of the server.

we could plan for example a settlement zone, and common strategies from the beginning of the server.

Nevertheless, we have achieved a good result here.

Anyone can wish for such a good coalition as Prime, they did not disappoint us in any way.

Certainly impact was that  they had internal problems and splits, but it does not change the fact that they had two times the advantage of accounts in the quadrant and not have coped.

This is confirmed by what we have already seen in the qualifying rounds – they can make nice offs, if they have calm, but in the fight for short distance does not cope, also they look poorly when it comes to def.

Cross-border battles with us were for them a secondary front. On these fight PS lost a lot – above all, the lack of a stable situation and using the potential of off in the direction of which did not give real strategic benefits.

From the point of view of the server layout, a much better solution for both parties would be NAP, not mutual destruction.

Maybe there would be chances in this situation, to oppose the victorious coalition.

I think that both they and us , we did not appreciate the strength of Dacia and friends.

It does not change the fact that despite the weaker performance, the CeBad coalition is still a serious opponent for everyone.

And certainly as we did not say the last word. Maybe next year will be better.

6.Yours commitment, time devoted to the game, gold,resources and yours def, it all contributed to this that we’ve come so high.

You can tell with a clear conscience – we played a good server.