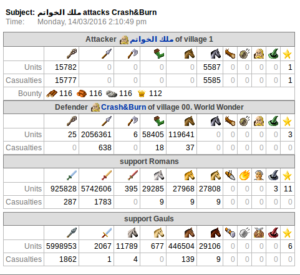 Attacks 17 Mars. Only one report, I think it must have been more. WW down from level 8 to 4.

We hope that we will survive both Russians and Arabs, since our deff wall is bigger than both our competitors and their hammers won’t do the damage that they should do with lower deff wall.

We will post reports also, today after noon, we are gathering them all and still we are under pressure from both RU and Arabs with incomings everywhere.

I found this scout report and I had to ask why he sent his hero too. The answer was that he always suicide his scouthammer in the end. Whatever it was a very nice amount of scouts 😀