I have enjoyed being free from Travian but a torn have gnawed on my conscience. I wasn’t finished with the Final and that prevents me from going to new projects. So…

I have gathered the last statistics, let’s begin with WW. We had 6 WWs running. As I predicted Russians and NW-meta would be the main fighters about the victory and as expected Poland took their own WW. 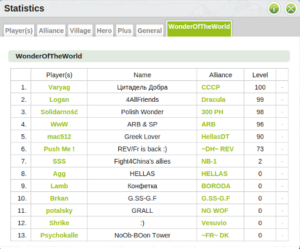 The Russian meta was the largest, around 1300 players and took their third Tournament victory. NW meta 1100 players.

Poland showed that a small determinant ally with 300 members could have its way even in the Final. Their 3rd rank is well deserved. A pity though that one of their leaders lost his/hers temper on the com forum in the end and claimed that all other players was stupid, in one way or another.

Arabs WW was also at top for a while. They had a much better organization this time (700 players) with a core of players that worked well together. I had the pleasure to fight them most of the server and after one of our duels I was told I had brought street war to a new level (chuckle). Well it was a healthy lesson in defending.. At least I conquered as many villages as I lost 😀 Arabs was a good enemy that made the server exciting, the night often had turned to morning before I was in bed.

It makes me a bit sad that the other metas neglected Arabs as they did. “They have not enough with def”, “Russians will take care of them”, “They are cheaters” A disparaging attitude in all. As Russians complained after their victory 2012 also the Arabs complains that they get no respect for their skills and that they got no response when trying with diplomatic. The answer is the same: Clear your ranks from cheaters. When a 2-villages account can be Top robber something is wrong and too many involved for the leaders to don’t know about it. That’s only one example.

HellasDT (60 members) took the step out from the shadows and cooperated fully with Russians this time. A strong offensive ally. Low def rank so they had a simming WW except from Natars.

REV-meta – the anarchy (700 members). Not enough with anything at all. Offence, deffence, leaders. Cooperating players, you name it. I’m surprised we kept our WW to the end – lol. Thanks to Poland who was charmed by PushMe! to let him share their BP.

Chinese had the possibility to build but didn’t until the last week.

The Hellas that didn’t wanted to cooperate with Russians simmed far out in SE the whole server and chiefed a WW from NE in the end.

Arabs holds the 1st rank in pop but Russians have 8 allys on Top20. Poland have all 3 main allys on the list. 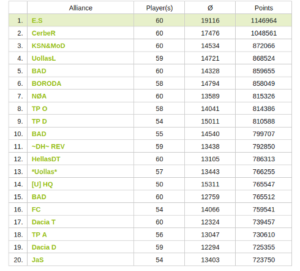 Attackers list… The Russians have a strong discipline. All, expect a few, settled in SW. Even those that didn’t wanted to play with the Russian meta stayed inside the borders and enjoyed their own game – the leading offensive ally as example, almost all points comes from their leader slaughtering own clubs and scouts. 9 of Top20 is Russian allys.

Arabs has rank 2 and 3. We defended a lot against them so mostly fair point there I presume. 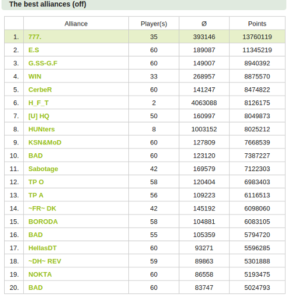 Except Chinese it’s seldom talked about Asian players as good players. Vietnam has a 4th rank. Mostly points coming from one player. Fair or not? I don’t know.

We haven’t heard much about Turks this round, but here they are on rank 19.

Defenders. The WW-holders allys holds the 4 top ranks followed by REV allys. Russians have 7 allys on Top20. REV-meta has 4 (including FC that leaved later) 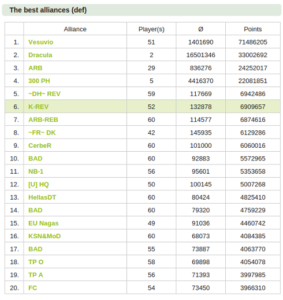 Population. The biggest player is an Arab, totally 7 arab players on Top20. NW-meta have 5 and Russians have 3. 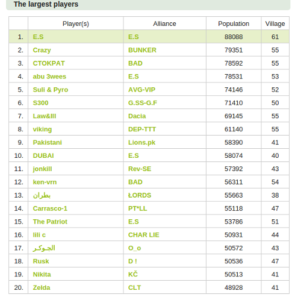 Biggest attacker – no comments. Russians have 9 on the list. Arabs have 3. 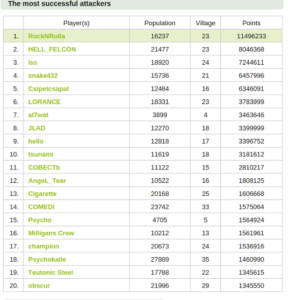 WW holders have a great advantage when it comes to def points. 9 of them on the list. 7 had artifacts, also easy def points. Of the resting 4 some might have had artifacts but my rank 20 depends on my self named enemy Sture from Def&Dest who together with a handful of friends attacked me (more then 100 attacks) the last minutes of the server. I sniped 15K catas, most of them Stures who send waves with 300 in each without escort. My cap had 207 pop left. For the rest of the points Arabs has my thanks 🙂 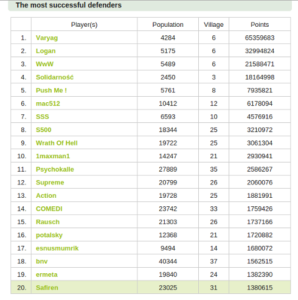 Heros – no comments. Before scrolls it was an honour to have the best hero. 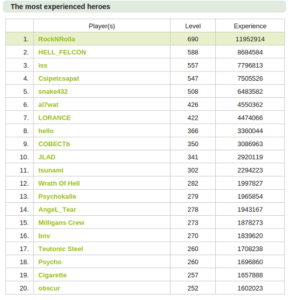 The biggest villages. Well – some have been simming a lot 😀 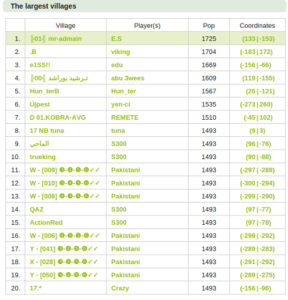 General: We started with 10K players. 6800 in the end. Tournament have unusual many players left in the end compared to a normal server. Many deletes because they are not used to the high resistance but many more stays and don’t give up even if their accounts are badly damaged and they are forced to move. If you lived in a “hotspot” and survived it is something to be proud of. 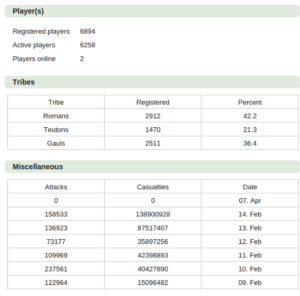