First a look on the Grey Zone, counted 26 December. The settling here continues. Maybe Grey Zone will be filled with villages before endgame?

I have problems to insert images, as you can see. Someone that can enlighten me how to do nowadays? The only thing I get to work is those tiny ones. 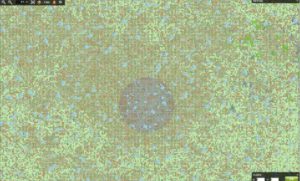 NW is most crowded, not many free spots out to 140. If the unique artifact will spawn around 50 there are not many choises. Hamsters (Russians), Romanians and Italiens are settled around the few ones. Even big arties will have hard to spawn except out to the borders of the quadrant. Maybe the best chance to get an arty is to zero an own village to make a free spot ^^ I would be tempted to give that a try *chuckle*

NE is crowded out to 50, more possibillitys here and more nations that have a chance to be the lucky one and found the unique beside. A bit out there are also areas very crowded.

SE,crowded out to 30. in the 50 coord area there are mostly Italians and MightyRU (Russians) with friends.

SW, the crowded area here runs out to 30-40 and then only half settled out to the 50 area where it’s a band of villages filling nearly every spot. Arabs, Portugal, and Equinox (Russians) are the biggest allys here.

Norway is the leading ally with 3 players amongst the top 6. 5 of them is EU-meta and 1 (rank 2) is a lonely? Chinese. First Russian on rank 10.

Enola (Russian) is the biggest ally. KSN&MoD (Czech-Slovakia) on second rank and EU-TRWL (Norway) on the third.

Turks are the ones that have bought most scrolls as they have 3 heroes on top 10. Fant may have had some help with fighting points too since he is top 1 attacker. A bit mysterious since he had settled out on 400/250.

As mentioned a Turk on first rank, followed by 5 Russians.

With Enola on top followed by 5 more Russians allys the russians shows that they still are a force to count with. Even with near the hole server against them they are not an sitting bird.

Mostly Russians here too, 8 of 10. The 7 first, Hamsters in top followed by Azbuka with nearly half as many players. An Italian ally, EUollasL ,on rank 8 followed by TP1. 5 allys is based in NE. 4 in NW.