It is time for the “After midgame counting”. I have checked the top100 alliances and the 40 top in off and def 5100 players. Last Final I checked 90 % of the server. This time I look an a few more things and stopped at 50%.

I’ve checked pop ofcourse but also what I will call the stability of an ally how many have transferred trough the ally, how many have deleted? On a final server there are many more facts to count with than on a normal server. Movements in Final are mostly depending on reorgansion. A great loss of start villages can be calculated if you want to move out in the wood or if you are a def ally. The amount of deleted accounts show how determinated the players are to finish this server. And also the ability to find new account owners replacing those who have tired. We have lost a third of the players on the server, the most top100 alliances have seldom lost more then 10%.

I have checked conquers/losses as well. Even if it not always shows who are fighting who it can give a picture of what is happening.

I’ve checked off and def points too in a try to find out where the hardest fights are going on. Who are the ones really doing something? As we all know the deffers don’t get the deffpoints so some allys without a rank in top40 def list can be doing a great work without our knowledge and as we all know our defenders is a very important on a Final server.

As the last point I checked the arties, not much have happend since last counting. I started this counting one week ago, some things have might have changed. I apologize for eventually faults.

The maps are NOT showing bindings. I only put alliances where they seemed to fit best for the moment and I’m not going to redo them to fit the final text. 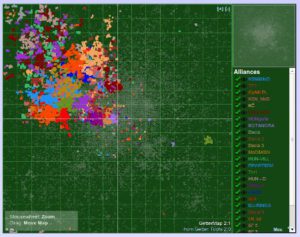 I’m doing this counting on nations and the first who shoes up is the Czech&Slovakias. They have 313 players. Their loss of players is mostly at average. With one exception their allys have lost more villages then they have conquered. The primary enemy looks to be Lerify, Litauen.

Polen have 174 players in meta and some that have quit the cooperation in an early stage, CyNK PL. TP1 is one of the most active in chiefing villages. Primary enemy have been DS&JAS and CCCP. TP2 have concentrated on ATOM and CyNK.

Romania 359 players. Romanians have been fighting since the first weeks and caused Russians a lot of trouble. They have reorganized some of their allys and that’s why Dacia 4 have 0/0 in member movements. Most Dacia have conquered more then they have lost. Enola, Hamsters, ARK and DS&JAS is main enemies.

Bulgaria 188 players. Average members movements except for БГ 7 that seems to have had a hard time. I have heard a lot of praises from the other meta allys in NW about Bulgarians. Hamsters, ARK, Lerify is main enemies. 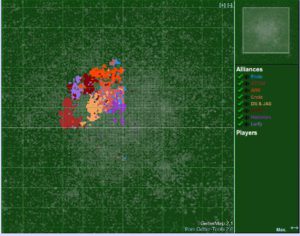 Russians 389 players/8 alliances. More members movement that I’m used to see amongs russians allys but not so many deletions except for ARK and Hamsters. If you look at conquers, the amount seems high but there are a huge amount of exchanging villages with other russian alliances. Romanian and Italians are main targets for Enola.Polen have conquered a lot from DS&JAS and Italians from Hamsters. 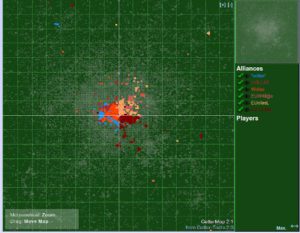 Italians are in all quadrants so they get an own map. 291 players/6alliances. Cooperate with both NW and NE-meta. They volontared for a kamikaze mission in grey zone and so far they have kept their promise. Even with the hard pressure from Russians the members movemensts are mostly average. Italians in NW have Hamsters, Portugal and Chile as main targets for conquests. They lose villages to Enola. Italians in NE have difficulties with Azbuka, Hap.com and OST A. In SE Italians takes villages from Azbuka and lost villages to MightyRU. 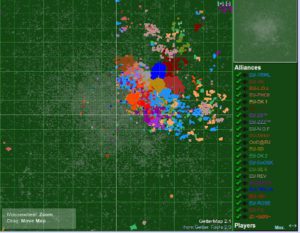 France 449 players. Members movement is either low or high. All allies have conquered more then they have lost. Exchange of villages is a big part of the conquers. Turkey and Russians is other targets. EU ~S~ is alone about having Russians in top, 22 villages conquered from Colapsar.EU -M- have conquered 18 villages from [U], Colapsar and Vodka.

Germany 187 players/5 alliances. Average movements, EU-FC have reorganized. Mostly more conquest then losses. Germans can’t have many russians or turks in their knot to stronghold. EU – ^.^ is the only ally with a russian enemy on top, 26 villages conquered from Vodka. The resting conqueres is very mixed.

A swedish ally and a Romanian ally merged so there are 30 players not scandinavian in this group. 225 players/ 5 alliances. Most low members movements. Big differences between allys in conquers and losses. Norway and Denmark have lost villages to Colapsar and [U]. The 2nd danish ally have also lost to Colapsar but also conquered from Turks and Russians. For the swedes Vodka and Tortuga are main opponents. The ally from Finland is missing on the lists, but they are few.

The last allies in EU-meta is a dutch ally (Nederlands) and a spanish ally. EU-REV (55) and EU-Melon(37). Average movements. REV lost more villages then conquered. REV main opponent is VODKA, 17-6 in favor to REV. 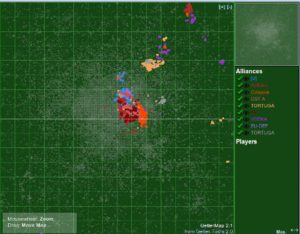 Russians, 286 players/9 alliances. Remember that I count top100 alliances and also top 40 in off and def. That is why even small Russian alliances is in the list. All sorts of movements here, both low, average and high. Not many deleted accounts except for in Vodka. High amount of conquests. [U] have exchanged 30 villages from other Russians but main enemy is France. Azbuka have the Italians in NE as primary target, 85-57. EU Clan targets Azbuka 21-4. Colapsar attacks all. Main opponent EU ~S~. OST A also targets the Italians 71-12. #11 in def, so someone must be attacking them. FV against Italians 33-17. Vodka is having a hard time. Their main opponents are .EU – ^.^, EU REV and EU FIN. 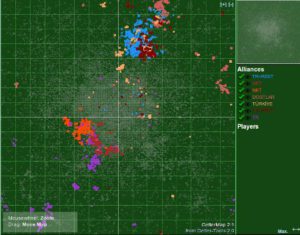 Turkey is spread over the hole map so they get their own too. In NE they have 199 players in 4 allys among the top100. They have a high degree of movements, If it is low it depends on reorganisation. They lost more villages then they conquer. Main target is EU. Exception T.R REST that have conqured 3 villages from Tortuga. 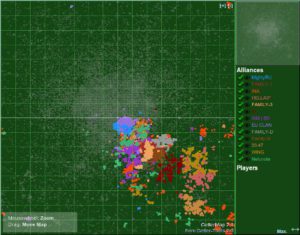 China & International, 382 players/8 alliances. Average movements, low grade of deliting. Except for Netunote, a spanish ally. When it is about conquering the Family seems to have a low interest in building chiefs. AIM and Neunote have been more aggressive. No main enemy.

MightyRU, the independent russians. 51 players. Movements between own wings. No delitions. 42 of the losses is exchanges. Conquers is mostly from Italians 90-18. EU-FL have lost 33.

Greece, 147 players/2 alliances. Connections with Russians in NE. Movements average to low. Conquering from unknown alliances, one of them from Vietnam, the other look spanish. 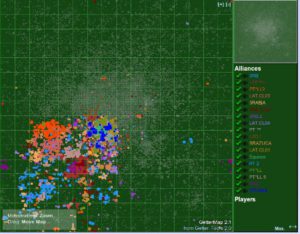 Arabs, 227 players/ 5 alliances. High movements and delitions.Conquers and losses very mixed. In some cases lost to MightyRU, Mega and Turks.

Portugal, 247 players/5 alliances. All sorts of movements and delitions. No big differences in conquering. Very mixed.

Turkey 169 players/3 alliances – and a single account ally that claims to be with turks but rumours says he is russian, he got many off points, the rumour says it’s because he kill troops in oaasis Average to high movements.High degree of conquests. Mixed targets. Some villages lost to Russians.