I’m playing this server because I wanted to learn more about this version of Travian and to write about my experiences here. Normally I only have one village on my observation accounts but this is so different that I need to build more actively to better understand how it works. I have to admit that I’m still looking for the hero’s inventory to change equipment- and adventures. And I’m still not convinced that it’s not hiding somewhere.

I’m not in an ally and I have politely declined the offers I’ve had. I’m not so known on this server as on the Tournament and I need to be seen as neutral as possible so I can get information that is interesting for you to read about – and so you dare to talk with me and answer my questions 😀

I can’t study how the artifacts works inside an ally and how they and regions are used in the best way – yet. I hope that I can join an ally later ingame and get a closer look. But not before you have been used to me and my curiosity.

I haven’t had many visits so far. The ones that have tried to raids me have succeeded a first time but given up when they don’t get any more. Quite peaceful. Until Mortimer begins to show a for me unhealthy interest.

It’s typical, the day I decided to take a day off and celebrate a welcome turn in real life with my husband I got catas incoming. I didn’t even check my accounts (Kingdom and RoA) before bed (blush)

It had happen before on other servers of course and there have always been players that have been willing to give a helping hand to an independent reporter. I found the right player to ask and the response was overwhelming.

Many thanks to Ele and The Twelve Monkeys for the fast and determinate help!

As you can see in my profile it happens that I play seriously ^^ On this server though is isn’t I that get the def points. Congrats Tuak & Rakia to 1st rank deffer! 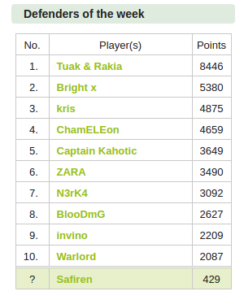